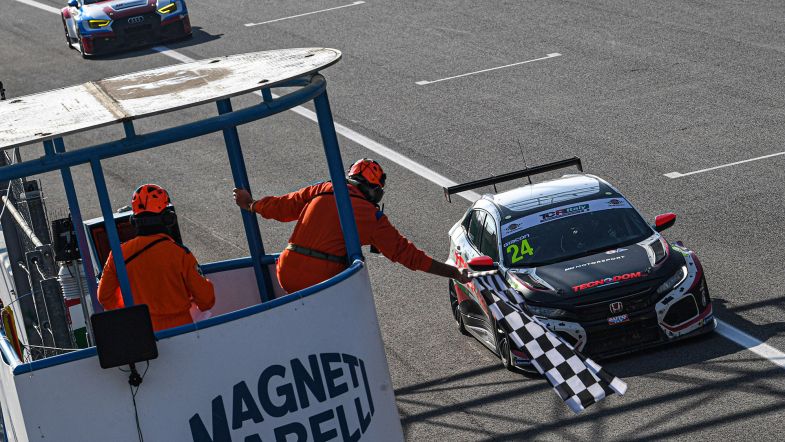 The Honda driver won the race ahead of title rivals Eric Brigliadori and Salvatore Tavano.

Title contender Marco Pellegrini started from pole position and claimed the lead while it was action behind the Target Competition driver.

Felice Jelmini and Simone Pellegrinelli collided on the first lap, resulting in a retirement for Pellegrinelli.

The safety car was called into action for two laps.

As the race resumed, Pellegrini made a mistake at the first chicane and lost the lead to Tavano.

MM Motorsport driver Giacon then put pressure on Pellegrini for second place, making the move stick not long after.

Giacon closed in on leading driver Tavano, claiming the lead at Variante Ascari on lap four.

Hyundai driver Pellegrini found himself in a fight for third position with Ronnie Valori and Brigliadori.

Audi RS 3 LMS driver Brigliadori benefited from the action and set his sights on Tavano who held second place.

Brigliadori was able to get past Scuderia del Girasole driver Tavano in the closing stages of the race, then quickly closing the gap to leading driver Giacon.

But there was not enough laps and Giacon won the race seven tenths ahead of Brigliadori and nine seconds ahead of Tavano.

Brigliadori heads the standings on 148 points, just two points more than Tavano while Pellegrini is a distant third on 116 points.

The season finale takes place at Imola on November 21-22.