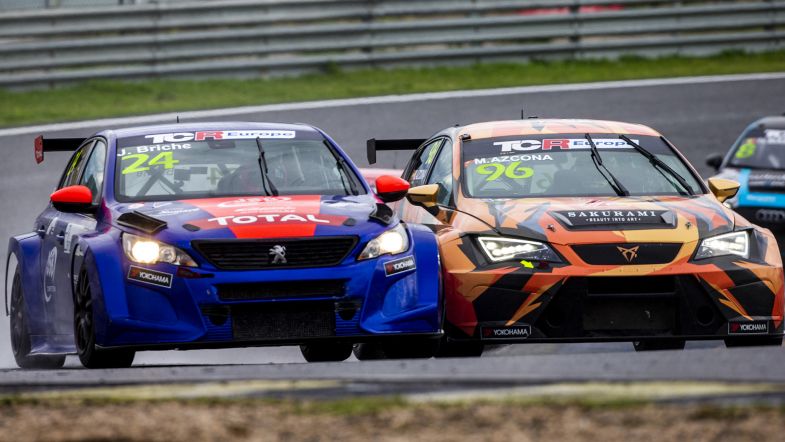 JSB Competition’s Julien Briché claimed a third place finish in the last race of the TCR Europe series season at Jarama, but the Frenchman believes that he could have fought for the victory if it hadn’t been for the safety car intervention.

Briché started from fifth on the grid at the wheel of his Peugeot 308TCR, gaining some positions in the initial stages and holding a hard fight with Volcano Motorsport’s Mikel Azcona (Cupra TCR).

Both made contact on several occasions and the Spaniard sustained damage to his steering column.

The JSB Competition driver had climbed to third place when the safety car was called into action after Mike Halder crashed out of the race.

“My start was anything but special, but I was able to recover some positions during the first laps,” said the Frenchman after the race. “Unfortunately, the first intervention of the safety car disrupted my rhythm, and this meant that my hopes to claim a victory were over.”

“I wanted to finish on the podium and so continued to push and had a tough fight with Azcona,” explained Briché. “However, this had an impact on my tyres that during the final laps were completely worn out; I struggled to keep control of the car, so I couldn’t prevent Bennani from passing me for second place.

“I took a lot of risks, but I wanted to finish in style what has been a difficult season for me,” concluded the JSB Competition driver.

Briché claimed his third podium of the season and tenth place in the championship.