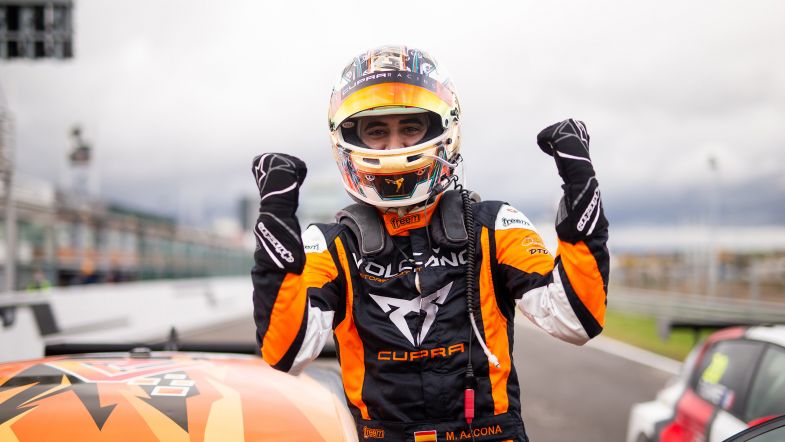 Mikel Azcona upbeat about progress after strong weekend at Jarama

2018 TCR Europe champion Mikel Azcona returned to the series for the second consecutive weekend during the season finale at Jarama, driving a Cupra TCR for Volcano Motorsport. The Spaniard enjoyed a strong weekend with a victory and a fourth place.

Two safety car interventions and difficult conditions paved the way for Azcona to win Race 1, taking his third consecutive victory. For Race 2, the Spaniard climbed from tenth on the grid to fourth place, where he fought with JSB Competition’s Julien Briché.

“I was overtaking Bäckman at Turn 1 when Briché came in and closed the gap, so we touched,” Azcona told TouringCarTimes. “After that my steering wheel wasn’t straight, but I still managed to stay in the race and fight until the end, but the podium wasn’t possible.”

The strong results allowed the Volcano Motorsport driver to finish 11th in the championship despite only taking part in two of the six events.

Azcona is now heading back to Motorland Aragon for the WTCR season finale where he races for Zengo Motorsport, driving the new-for-2020 Cupra León Competición. And the Spaniard claimed the first victory of the new car just a week ago at the Spanish track.

“2020 has been an incredible year for us,” Azcona explained. “We arrived at Zolder without having tested with the car and we were last.

“Bit by bit we have improved in every race. I’m with a good team with hard working mechanics and the car has just become better at every race. The victory at Aragon was great and shows the potential of the car, which I think is a winning car,” added the Spaniard.

Azcona lies sixth in the overall classification, 61 points behind Lynk & Co’s Yann Ehrlacher, with 80 points in play at the Aragon season finale.

“Our target is to go full on again and achieve the best results possible at Motorland,” added the Zengo Motorsport driver.

“This year has been like a long test for us and now that the car is in a much better place our target for next year is to win races and fight for the championship.”