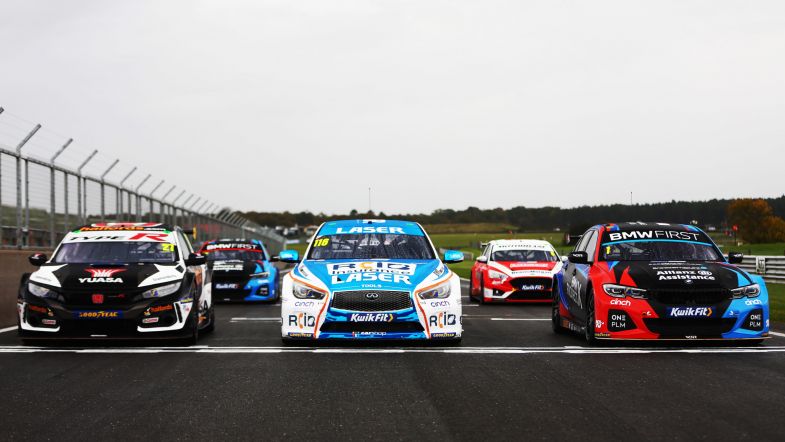 A month after the championship should already have been decided, the fight to determine who secures the 2020 BTCC title will draw to a close this weekend when the series heads for Brands Hatch for the final three raced of the campaign.

In a change to the norm following a season affected heavily by the impact of COVID-19, the title won’t be decided around the full Grand Prix circuit, but on the shorter Indy loop instead – a decision made to take into account the reduction in daylight hours.

The late end to the season also means a change to the usual format, as was the case in the penultimate event of the year at Snetterton – with teams having just one free practice session on Saturday before qualifying, and an earlier start on Sunday to get all three races in before the sun goes down.

Only one championship title has been decided thus far after Ash Sutton secured an unassailable lead in the Independents points at Snetterton last time out, with the Laser Tools Racing man one of five drivers who still harbour hopes of taking the overall crown.

Heading into the penultimate meeting of the year, it was Sutton who was the man to beat but that was before a stunning weekend for Colin Turkington saw him vault back into the points lead with just one round of the season – shortened by a round thanks to the coronavirus pandemic – left to run.

Turkington’s advantage going into this weekend stands at nine points and whilst that might not sound like a lot, this is the stage of the season where having points on the board is more important that ever.

It’s also worth noting that Sutton has only outscored Turkington by more than nine points on two occasions all season – at Thruxton and Croft where the BMW man ran into trouble.

For Turkington, there is the chance to secure a place in history as a third straight title would move him onto five for his career – which would move him clear of Andy Rouse in the record books.

“The season finale is so special because there is such a big prize at stake,” he admits. “We’ve worked towards this goal all year, dedicating and sacrificing on many levels to try and come out on top. The scale of the prize brings extra pressures and intensity, and that creates an electric atmosphere.

“I’m a competitive person when it comes to racing and I enjoy the challenge, so ultimately winning is the drug and that’s the feeling I’m always chasing. It also helps to be in the best team; they present these opportunities for me each year.”

Turkington might have the points on the board, but Sutton will arguably be at his most dangerous in the position of hunter rather than hunted, with the former champion having nothing to lose – at least going into the weekend.

Should Sutton hit the ground running on arrival at the Brands Indy circuit then there is no doubt that he will be ready to put the pressure firmly on Turkington when the action kicks off.

That is particularly true should it rain – something that is a distinct possibility given the mid-November date for the finale.

“The aim for us at the start of the year was to get to the final round and be in with a chance, and that is what we have done,” he said. “The year I won the title, I went into the final leading the way but I feel I have a better package this season.

“Brands Indy will be a tough circuit and we know how close it is and how critical qualifying will be – that could be the key as a quarter of a tenth could be a few places on the grid and we need to make sure we can stay out of trouble.

“If we hit the ground running and have a solid Saturday then I feel confident going into Sunday. If it happens to be wet, then I thought the Subaru was good but this car is something else – and that would play to my strengths.”

What might work against both Turkington and Sutton would be mixed conditions where the circuit is between being fully dry, or fully wet.

Such conditions are when the rear-wheel drive cars find the going tough and could turn things towards the two front-wheel drive car that have a realistic chance of still winning the crown.

Dan Cammish sits third in his Honda and heads to the final round 25 points down on Turkington in the standings. In an almost mirror image of last season, Cammish had been chipping away at the drivers ahead in the second half of the campaign, outscoring both Turkington and Sutton at Thruxton, Silverstone and Croft.

Although he lost ground at Snetterton, the Honda driver will be eager to try and make amends for the massive disappointment he suffered on the longer GP circuit twelve months ago.

“I had high hopes going into Snetterton, but unfortunately a few guys who aren’t in the championship fight hampered my progress – I don’t think I had a straight panel on my car by the end of the day!” he said. “But it’s all still to play for, I love the Indy circuit at Brands and I’ll be giving it my all to win the Drivers Championship.”

Tom Ingram is another driver who will have work to do on Finals Day, thanks in no small part to his clash with fellow hopeful Rory Butcher in the final race at Snetterton.

The Speedworks driver looked set to go into the final just over 20 points off the championship lead but instead, is 35 points down as he seeks to take his first title. That is a gap that will be hard to overhaul, leaving Ingram to simply go for race wins and see what the end result is.

“Obviously it’s nice to be going into the season finale in with a shout of the title for the fourth year in a row, but I’m under no illusions that I’m the outsider in this battle and that realistically, I’ll need a fair amount of misfortune to befall the other guys,” he said. “We’re not in control of the championship situation, and to be honest, we will approach Brands Hatch the same way we would any other race weekend. All we can do is focus on ourselves and do the best job we can – and at the end of the day, if that’s enough then that’s enough.

“We all know how quickly things can turn around in the BTCC, and while our chances are obviously slim, nothing is impossible. We’re very confident in our race pace and overtaking ability, and the other guys will all be scrapping amongst themselves and potentially not looking elsewhere, so we need to make sure we pounce upon every single opportunity that arises.”

Butcher meanwhile is in mathematical contention, even if his realistic chances of taking the title for Motorbase are all but over for this season.

Like Ingram, his only goal going into the weekend is to try and bring home the best results possible for the new Focus ST.

“It’s great to be going into the season finale with a mathematical chance of winning the title, albeit slim, as this was a goal of mine at the beginning of the year,” he said. “We’ve been contenders all season and as a team we have achieved so much with the brand-new Ford Focus ST – everyone at Motorbase Performance should be extremely proud. We’re looking forward to Brands Hatch – the team’s home circuit – and we will give it everything!”

Aside from the overall title, BMW takes a lead of 48 points over Honda into the final rounds in the manufacturers’ standings whilst WSR lead Team Dynamics – under the Team BMW and Halfords Yuasa Racing names – by 67 in the teams’ standings; with both now being head-to-head battles in the final three rounds.

Laser Tools Racing head Motorbase by 24 points in the Independents teams’ standings with 60 up for grabs, whilst the Jack Sears Trophy could still go to one of four drivers after Bobby Thompson dropped out of the battle with his ongoing issues with concussion.

Michael Crees leads the way for BTC Racing but is only eleven points clear of Team HARD’s Carl Boardley. MB Motorsport’s Sam Osborne and Ciceley’s Jack Butel would have to come from 25 and 39 points back respectively if they were to win.