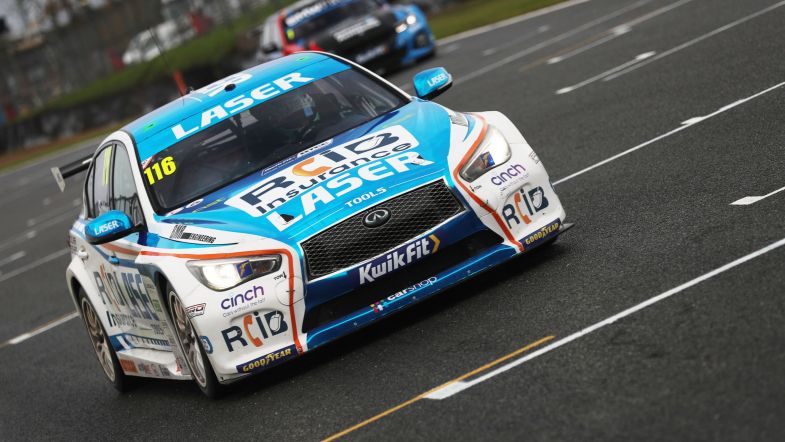 Ash Sutton: “We need to stay out of trouble”

Ash Sutton insists that staying out of trouble is key to his chances of securing a second BTCC title at Brands Hatch after qualifying third on the grid for the season finale.

The Laser Tools Racing man was able to make the most of favourable wet conditions around the tight Indy circuit to lead the way for a chunk of qualifying his Infiniti Q50, only to be knocked back to third by Tom Ingram and Rory Butcher late on.

A red flag in the closing moments caused by Carl Boardley going off in his BMW prevented Sutton from then trying to reclaim top spot, although he remains well placed to try and overhaul Colin Turkington – who will start race one from eighth spot and takes a nine point lead into the weekend.

“A bit of luck has fallen our way with the weather today but we had the pace to be on pole,” he said. “I played the safe game a bit in those conditions as I didn’t want to go off, cause a red flag and lose a lap like at Croft. It was a case of piecing the lap together and our theoretical time would have put us on pole – we just couldn’t respond to Tom and Rory because of the final red flag.

“It would have been nice to have a few more cars between me and Colin and it was ideal when we were in P1 and he was outside the top twelve. There are only five cars there and we have seen how quickly things can change.

“Lapping yourself in practice and qualifying is one thing but tomorrow will be another and it can all go wrong with just a little tap. We have to try and bag good points from race one and two and stay out of trouble.”