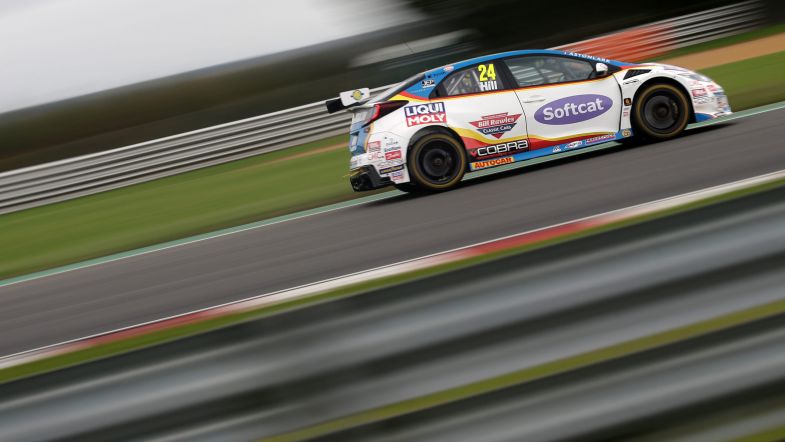 Jake Hill topped the times in the final practice session of the BTCC season at Brands Hatch as the five title contenders completed their final preparations for one of the most important qualifying sessions of the campaign.

Tom Ingram was the early pace setter in the hour long session, setting a time of 55.118s that would stand as the fastest lap as drivers completed their opening runs before light rain started to fall.

Despite that, Hill became the first driver to break the 55s mark with 25 minutes completed in the MB Motorsport Honda – which put him half a second clear of Ingram and Ash Sutton, who held third in the Laser Tools Racing Infiniti Q50.

Two more title contenders followed behind, with Dan Cammish fourth and Rory Butcher fifth, with points leader Colin Turkington finding himself down in 17th spot in the early stages.

However, the Northern Irishman was one of the drivers who was starting to find time despite the tricky conditions as the session approached the the half-way stage – moving up into 14th with a lap 1.451s off Hill’s best.

Aiden Moffat was the next driver to get involved in the mix towards the sharp end of the grid, setting a time in the Infiniti that was good enough to see him slot into second spot – despite being handed a warning for exceeding track limits.

Having spent some time in the pits having worked carried out on the BMW, Turkington started to make his move up the order as the session approached the final 20 minutes, edging his way towards the top ten.

Sutton improved up into second with 18 minutes remaining as he joined Hill in dipping under 55s, with Ingram and Cammish both also improving heading into the final quarter of an hour – with the latter moving up into third place.

Although the whole field headed out in the closing stages, the changing track conditions meant there were no late improvements, with Hill ending up topping the times ahead of Sutton and Cammish, with Moffat, Ingram and Butcher rounding out the top six.

Ollie Jackson was seventh fastest in the second of the Motorbase Fords, with Chris Smiley’s EXCELR8 Hyundai in eighth being the final car to lap within a second of the fastest time in a busy session that saw drivers looking to maximise their time on track.

Josh Cook and Senna Proctor rounded out the top ten, with Turkington ending up with the 14th best time.

Series newcomer Brad Philpot was 25th quickest in the Power Maxed Racing Astra, ahead of Jack Butel and Ethan Hammerton.

Despite the challenging conditions on track, there was little in the way of major drama – although there were still a number of minor excursions.

A brief off for Andy Neate at Graham Hill Bend, spins for Nic Hamilton and Glynn Geddie at McLaren and trips through the gravel for BTC Racing pair Michael Crees and Cook were the incidents of note.