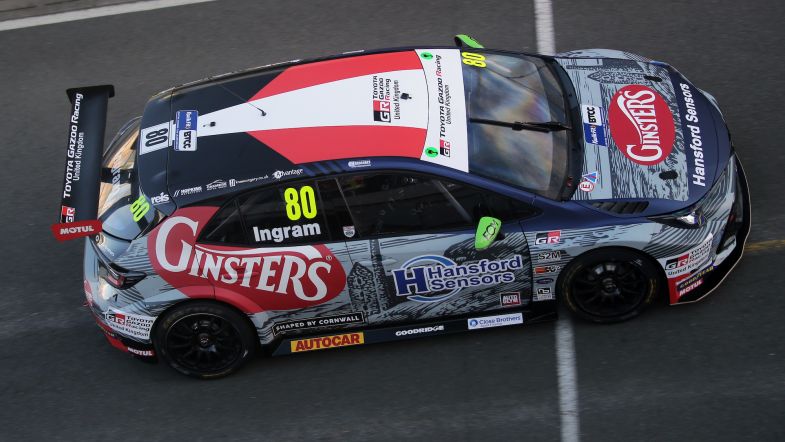 Tom Ingram secured the final pole of the 2020 BTCC season after a dramatic qualifying session around the Brands Hatch Indy circuit.

The session kicked off in cloudy conditions but on a wet circuit after rain had fallen consistently following practice earlier in the morning – the tricky conditions being shown early on when Michael Crees suffered a trip off track in the BTC Racing Honda at Surtees.

Dan Cammish was the early pace-setter as drivers set about posting lap times immediately, rather than diving in to swap tyres, with the Honda man posting a 55.471s lap only to be headed by Ash Sutton as he set a 55.077s to take provisional pole just before the session was halted to recover Senna Proctor’s Hyundai from the gravel at Druids after he went straight on into the tyres.

Sutton held provisional pole from Cammish and team-mate Aiden Moffat as the cars returned to the pits, with Stephen Jelley, Josh Cook and points leader Colin Turkington sitting inside the top six and three drivers – including title outsider Rory Butcher – yet to set a time.

With the Hyundai recovered from the gravel and Proctor starting the long walk back to the paddock, the session resumed in what appeared to be worsening conditions, but Cammish improved straight away to put his Honda back onto provisional pole with a lap 0.044s up on Sutton, and Tom Oliphant in the second of the BMWs jumping up into third.

Butcher’s first flying lap was also a strong one to move him into fourth ahead of an improving Turkington.

The see-saw battle for pole swung towards Sutton with ten minutes on the clock as the Infiniti improved by a slender margin to go ahead of Cammish, with Turkington slipping back to ninth as both Ingram and Ollie Jackson improved to climb into the top ten before bringing the BMW back into the pits.

Matt Neal was the next to improve in the Honda to go fourth, just before he suffered a spin going into Clearways and nudged the barriers.

As drivers cycled through mid-session tyre changes, Sutton held pole from Cammish and Ingram, with Jake Hill, Neal and Moffat rounding out the leading six.

The two Dynamics Hondas continued to push the limits, with Neal going off across the gravel at Paddock and Cammish then spinning a second time at Clearways – luckily managing to keep the moving to return to the pits as the session headed into the final ten minutes.

A storming lap Paul Rivett’s Audi saw him suddenly jump into the top six, with improvements elsewhere meaning Turkington suddenly found himself outside the top ten in his ballast-laden BMW before the session was halted a second time after Jake Hill slid off at Paddock Hill Bend.

That meant the clock was reset to ten minutes ahead of the restart, with Hill dropping behind Ingram’s Toyota into fourth when he lost his best time for causing the red flag.

As Dynamics worked to patch up the front of Cammish’s car after his earlier bump into the tyres, the field then headed out once again, with Turkington the last driver to leave the pits in the BMW.

A personal best in sector one and fastest of all in sector two saw Butcher go onto provisional pole with a time just 0.010s quicker than Sutton, with Ingram then going faster still in the Toyota as Turkington also improved to go up to eighth.

With just two minutes on the clock, the session was halted a third time as Carl Boardley suffered a spin at Paddock Hill Bend and the decision was taken not to restart – giving Ingram pole and the additional bonus point.

Butcher will share the front row, with Sutton and Cammish behind as four of the title contenders locked out the front two rows of the grid.

Ollie Jackson improved to fifth place late on ahead of Hill, with Neal and Turkington rounding out the top eight – the latter unable to complete his final run due to the stoppage. Rivett and Cook rounded out the top ten.

Ahead of the title decider, Turkington’s eighth place on the grid was enough to secure the Wingfoot Award as best qualifying – taking the new award by a point from Cammish.