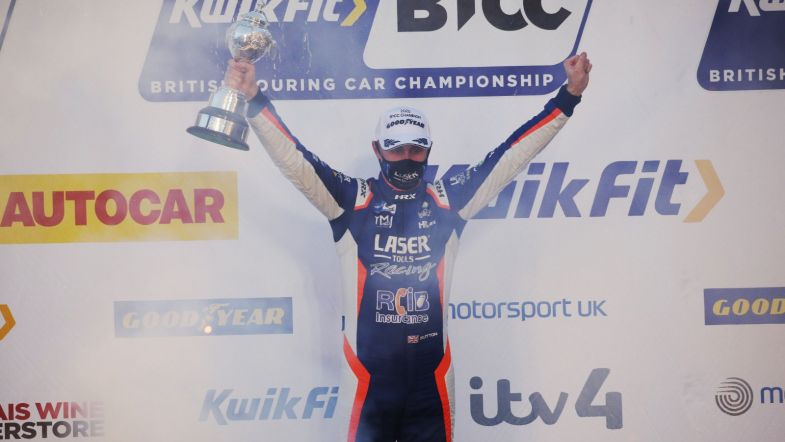 Ash Sutton admitted that it had been a “mega achievement” after the Laser Tools Racing driver wrapped up his second BTCC title at Brands Hatch.

Sutton had gone into the season finale chasing down the BMW of Colin Turkington, and moved into the points lead after the opening race of the weekend – where he secured a solid second behind Dan Cammish and Turkington could only manage ninth.

A storming drive to victory in race two put Sutton in the box seat for the season finale with an eleven point lead, and sixth place in tricky wet conditions was enough to add the overall title to the Independents’ crown he secured last time out at Snetterton.

It marks a second title for the 26-year-old, who won his first crown with BMR back in 2017.

“It’s a mega acheivement for us to win the title this season with a new car, and what is a new team after the merger of Laser Tools and BMR,” he said. “I came into the season wanting to win the title, and to come away having won three with the overall, Independent and Independent Teams titles is absolutely mega.

“BMR Engineering have built two amazing cars and Laser Tools Racing have done a fantastic job in running them this season. The conditions this weekend have been tough for everyone but I think there has been a lot of respect shown for the title contenders by everyone and we’ve seen some good racing.

“People say the second title is easier to win but I can you right now that it isn’t! There was more pressure than before as people expected us to be in the mix and I didn’t have that first time around with the Subaru. However, we came into the weekend fully prepared, and with a good team behind me, it all worked out perfectly.”