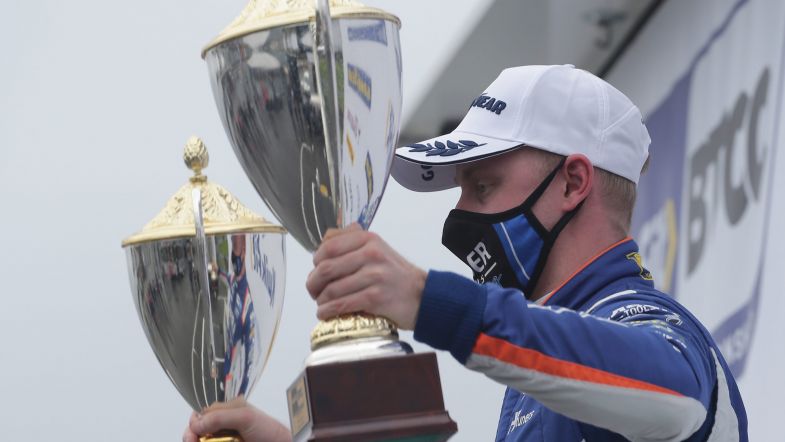 Ash Sutton has extended his lead in the BTCC points standings with just one race left to run after securing victory in the second race of the weekend at Brands Hatch.

The race was held on a drying circuit that left teams faced with a tough decision over which way to go on tyres, with the vast majority making the call to switch onto slicks as they sat on the grid prior to the start.

When the lights went out, it was Sutton who made the best start to jump into the lead but the slippery conditions were evident at turn one as Tom Ingram got sideways, and Motorbase pair Ollie Jackson and Rory Butcher took a trip through the gravel after coming together with Jake Hill’s Honda.

At the end of the lap, it was Tom Chilton however who had moved to the front having taken the decision to start on wet tyres, with Andy Neate also rocketing up the order in his Motorbase Ford to run well inside the top ten.

Chilton would build a handy lead in the opening laps from Sutton and Dan Cammish behind, but Sutton was lapping quicker than the Honda ahead by the end of lap four – ironically at the same time as Neate managed to get ahead of Cammish despite being on what seemed to be the wrong tyre by that point.

Sutton eventually made his move for the lead at Surtees on lap nine to secure the lead of the race as the wet tyre shod cars started to drop out of contention and those that had run into issues early on started to recover through the field.

Ingram was the big mover having dropped out of the top ten on the opening lap and having battled back into the top six, he suddenly found himself in the podium positions after a chaotic twelfth lap where Cammish and Cook went side-by-side at Paddock Hill and Colin Turkington then almost ran straight on whilst chasing the pair at Druids – damaging the front right of his car in the process.

After that drama, Sutton found himself out front with Ingram now running in second spot, and Cammish and Turkington behind fighting over third spot.

Sutton would edge away to take the win, scoring the fastest lap in the process for a maximum score, with Ingram taking second spot – although that didn’t keep him in the title fight.

Third would go to Turkington, but only after a dramatic moment at Paddock Hill when he came through the corner chasing Cammish only to find the Audi of Paul Rivett parked across the circuit after a spin. The pair were able to avoid the stricken car, with Turkington slipping up into third in the process to secure vital points that leave him nine points behind.

Cammish took fourth and remains in the mix for the title, but will need to take the win with fastest lap and hope Sutton doesn’t score – and also finish well ahead of Turkington in the reverse grid final race, where the top twelve will be swapped.

Fifth place went to a recovering Jackson ahead of Adam Morgan, who was able to make up places as the race wore on in the Ciceley Mercedes to secure a solid haul of points on the final weekend for the car.

Hill also battled back from the lap one drama to take seventh spot, with Senna Proctor, Josh Cook and Butcher rounding out the top ten.

After their early strong pace on wets, Chilton and Neate would fail to score and dropped off the lead lap.

Carl Boardley had been one of those to gamble on wet tyres but pitted at the end of the opening lap and didn’t return to action, which meant Michael Crees was able to wrap up the Jack Sears Trophy title.