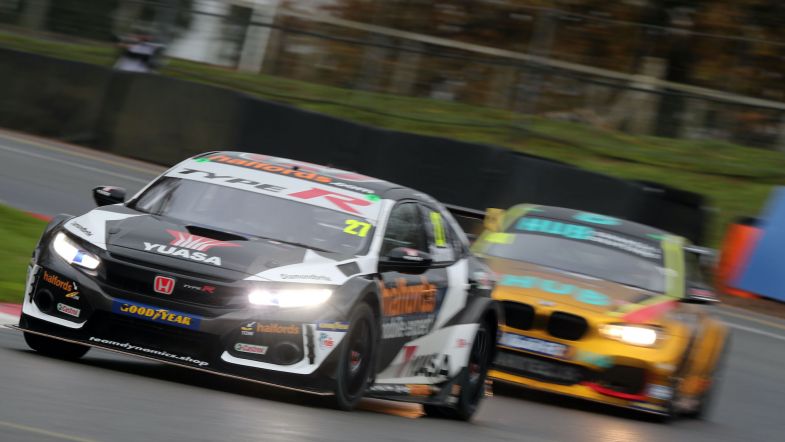 Dan Cammish produced a fine drive in tricky wet conditions to win the BTCC opener at Brands Hatch, with Ash Sutton taking the points lead after race one of the season finale.

Tom Ingram had qualified on pole and was able to keep the lead when the lights went out as fellow front-row starter Rory Butcher dropped back to fourth, with both Sutton and Cammish getting ahead of the Ford from the second row of the grid.

Ingram would head the field through the early stages as he looked to keep his title hopes alive, whilst behind, Cammish managed to slip ahead of Sutton into Druids onto lap four to go second in the Dynamics-run Honda.

The Safety Car was then deployed after Glynn Geddie and Sam Osborne clashed at Druids and shortly after the restart, Cammish made his bid for the lead, sliding – quite literally – up the inside at Druids to move into the lead.

From there, the Honda driver edged away at the front to secure a vital race win, which takes him to within eleven points of the championship lead.

Behind, Ingram would come under ever-increasing pressure from Sutton as the Infiniti started to find more pace as the laps ticked down. Making his move at Surtees on lap 22, the Laser Tools Racing man swept through and immediately then set the fastest lap of the race to secure a vital bonus point.

Although he would close in on Cammish through the closing laps, Sutton had to settle for second spot but has now assumed the championship lead once again with two race left to run. Ingram took third, keeping his title hopes alive for at least another race but fourth for Rory Butcher wasn’t enough to keep him in contention.

Ollie Jackson and Jake Hill followed behind to round out the top six having run in the same positions from the start, with Matt Neal also finishing where he started in P7.

Having started in eighth, defending champion Colin Turkington held his position off the start but would struggle for pace in the BMW as the race wore on, slipping behind the BTC Racing Honda of Josh Cook after the safety car restart to finish in ninth spot, which means the Northern Irishman now drops two points behind Sutton in the standings.

Tom Oliphant in the second of the WSR-run BMWs, rounded out the top ten.

Further down the order, Paul Rivett was the leading runner in the Jack Sears Trophy entrants in 15th overall, with Michael Crees taking third in class to extend his lead over Carl Boardley, who dropped back with a sick-sounding BMW in the closing stages and is now 17 points behind.