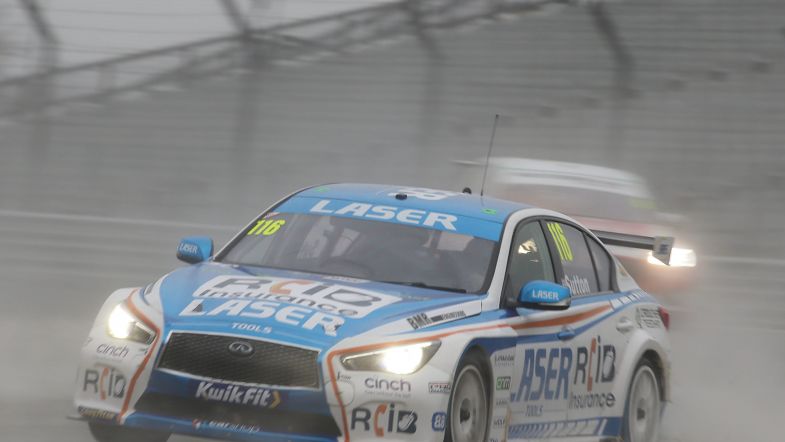 Rory Butcher secured victory in the final race of the 2020 BTCC season but the big winner was Ash Sutton as the Laser Tools Racing driver took the championship title for the second time.

Butcher led the race from start-to-finish for Motorbase in tough conditions after heavy rain his the Brands Hatch circuit just before the race was due to start – making conditions on track more difficult than ever.

The focus of the race was on the three title contenders, with Sutton leading Colin Turkington and Dan Cammish in the points but all three needing to come through the pack after the top twelve on the grid were reversed.

Turkington made the best start of the trio to quickly jump up into seventh, but it was Cammish who was the man on a move as he had most ground to make up – and he soon worked his way up to the BMW and then got ahead into the top six, with Turkington and Sutton behind.

Cammish would continue to fight his way forwards and briefly made it into the top three, but that wouldn’t have been enough to secure the crown regardless of what happened behind.

Sutton seemed happy to follow Turkington but when he had the chance to make a move on lap 19, the Infiniti moved ahead – helping to cement his championship advantage.

Sutton would also get ahead of Josh Cook late on whilst Turkington slipped back down the order and when Sutton took the flag in sixth and Turkington in ninth, the title win was secured.

Butcher’s win saw him take victory ahead of the Toyota of Tom Ingram, which once again showed strong pace as the Speedworks driver added to his podium tally, with Jake Hill ending his campaign with another trophy in third.

Cammish was fourth ahead of Adam Morgan’s Mercedes, with Sutton, Cook, Moffat, Turkington and Ollie Jackson rounding out the top ten.