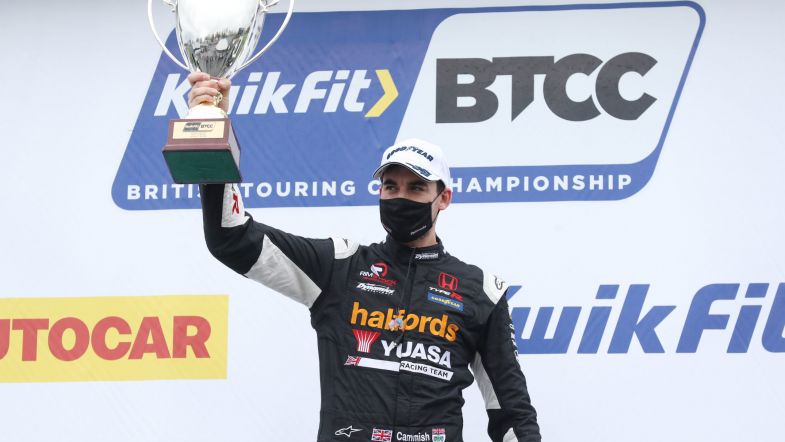 Dan Cammish insisted he felt “content” after bringing the curtain down on his 2020 BTCC campaign with third in the standings at Brands Hatch.

The Team Dynamics driver headed into the season finale as one of those drivers in contention for the title, and made up ground on Ash Sutton and Colin Turkington ahead when he stormed to victory in the opening race of Finals Day.

Although Sutton then took victory in race two, a podium finish for Cammish allowed him to stay in the mix for championship honours in the final race of the year.

Whilst Cammish was the best placed of the title hopefuls in the race, Sutton followed him home in sixth to secure the title, with Cammish ending the campaign in third place – just two points behind second-placed Turkington.

It meant Cammish ended the year as the best of the front-wheel drive entries for a second season in succession.

“I’m very content at the end of the season,” he reflected. “We have had a good end to the season and I drove the wheels of what we have got this weekend. To get a win, a third and a fourth across the weekend in this championship is a mega haul of points and anyone would be happy with it.

“I’m happy to retain P3 in the championship which was important for me, and to be the best front-wheel drive car again is no mean feat as it’s tough our there. Although we didn’t quite have enough at the end, there are a lot of positives for us to take away from it.

“I feel the opposite of twelve months ago when I left Brands Hatch feeling so down about what had happened, whereas this time I’m happy. Dynamics have done a fantastic job and haven’t put a foot wrong, so thank you to them and well done to Ash as he has been a deserving winner.”

Cammish added that he was proud to have been part of the grid during the challenging 2020 campaign, which ran behind closed doors as a result of the COVID-19 pandemic.

“It has been tough for the teams as they have been stretched more than ever, but for me as a driver, I’ve enjoyed racing more often as it is what I love to do,” he said. “The series has done a great job to get nine rounds in this season, and ITV have worked hard to make sure that the fans could see it all; we’re looking forwards to welcoming them back. I’m proud to have been part of it.”