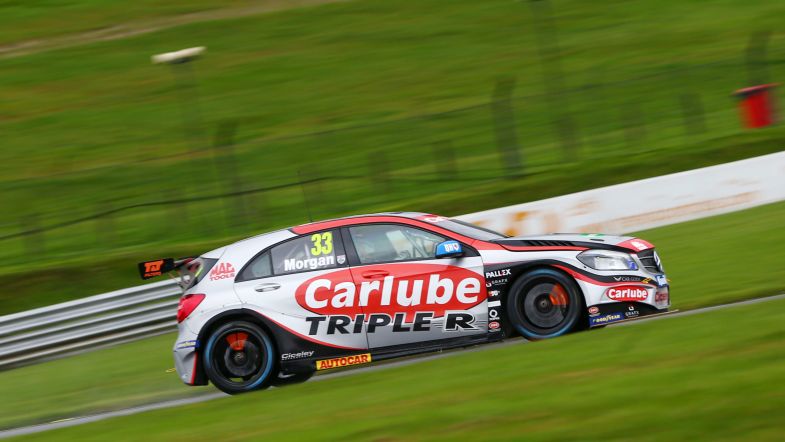 Adam Morgan excited by Ciceley future as A-Class bows out

Adam Morgan says he is excited by the future plans for his Ciceley Motorsport team after bringing the curtain down on its time with the Mercedes A-Class at Brands Hatch.

The team has run the car in the BTCC since 2014 when it was introduced to replace the Toyota Avensis that Morgan had used for his first season running with his family team, and has since gone on to carry the 32-year-old to eight wins and 30 podiums.

The A-Class also took a further three wins, and seven podiums, in the hands of Aiden Moffat and Laser Tools Racing from 2015 through to last season.

Morgan’s final outing in the car looked set to be a tough one at Brands Hatch after he struggled to 17th on the grid in qualifying, but a solid opening encounter saw him battle his way forwards to the fringes of the top ten.

That was followed by a brace of top six finishes in the final two races to ensure that Morgan ended the campaign eighth in the championship standings – four places higher and 51 points better off than last season, despite the season being three races shorter.

“After qualifying in 17th, we thought we were going to struggle but we moved forward to eleventh in race one and then up to P6 in the dry,” Morgan said. “We then made some changes for race three and it worked well and meant we could finish off with fifth, so I’m really happy that we’ve been able to see the car off with a decent weekend.

“Of course we’ll be sad to see it go, but it has done us proud over the last seven seasons.”

Improved results this season included a victory at Oulton Park, with Morgan insisting that changes made for 2020 had shown that the car – which has now been put up for sale – could still be competitive in the series.

“When we built the car, there was no CAD to help – we put a cage in and worked to get the car where it needed to be,” he said. “Paul Ridgway helped us with the design of the car and whilst it was hard for us to go up against manufacturers like BMW and Honda – and teams like West Surrey Racing and Team Dynamics – I think we can be proud of what we have done.

“At the end of the day, the car was built using components that are replaced and upgraded all the time, and the only thing that is old about it is the shape. This season, Steve Farrell my engineer has totally flipped the car from where it was last year and we showed good pace all season and that the Mercedes can still do a job and fight at the front, like we did at Oulton Park. It can still be a competitive package for someone going forwards.”

Ciceley has yet to reveal its plans for 2021, but Morgan said he felt confident that the new package would be one that would allow him to battle for championship silverware.

“Hopefully all will be revealed pretty soon,” he said, ” and we hope to release it as soon as we can once the news from this weekend has died down a little bit.

“We want everyone to know what is going on and it’s very exciting. We can’t wait, and I’d certainly like to think that we’ll be right in contention next year.”