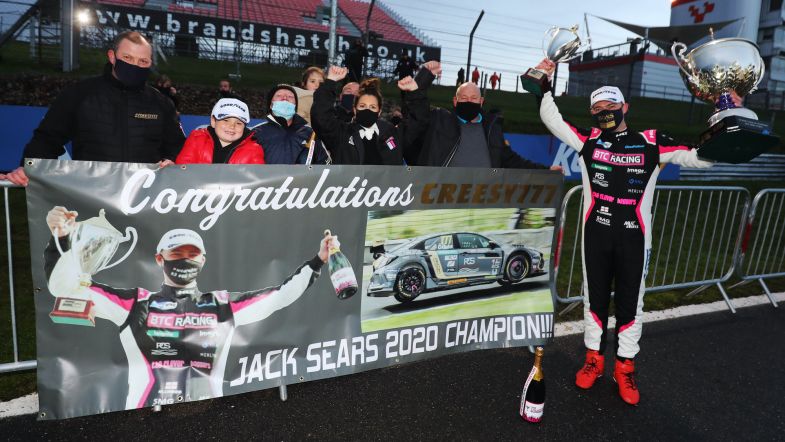 Michael Crees admitted he was almost lost for words after wrapping up the Jack Sears Trophy during the BTCC season finale at Brands Hatch.

The BTC Racing driver held the lead going into the weekend having moved back to the head of the points at Snetterton, and was one of four drivers still in contention for the crown – with Bobby Thompson dropping out of the battle due to his ongoing concussion issues.

With Carl Boardley and Sam Osborne both having issues in the opening race, Crees was able to strengthen his lead at the top of the points and when Boardley then retired early on in race two, it meant Crees was able to secure an unassailable lead in the standings to secure the JST crown in his second season in the series.

It meant a second career title for the 37-year-old, who won the Am class of the Ginetta GT4 Supercup before making the step into the BTCC.

“It’s unbelievable,” he admitted. “This was the goal at the start of the season and there were points when I didn’t know if we would get it, but we dug deep and have brought it home. Hopefully there will be more to come after this.

“If you had told me a few years ago that I would be here winning this trophy then I wouldn’t have believed you. It just shows that if you put your mind to something have support behind you and keep going, then you can do anything.

“I think I have grown a lot as a driver this season and have got rid of some of the silly mistakes that have been there in the past. I’m still learning and the team have helped a lot this season, as has Josh Cook – I think he wanted this more than I did!

“Hopefully I can keep getting quicker next season and keep learning, and the next goal now has to be to go for the Independents’ title, however long that might take.”