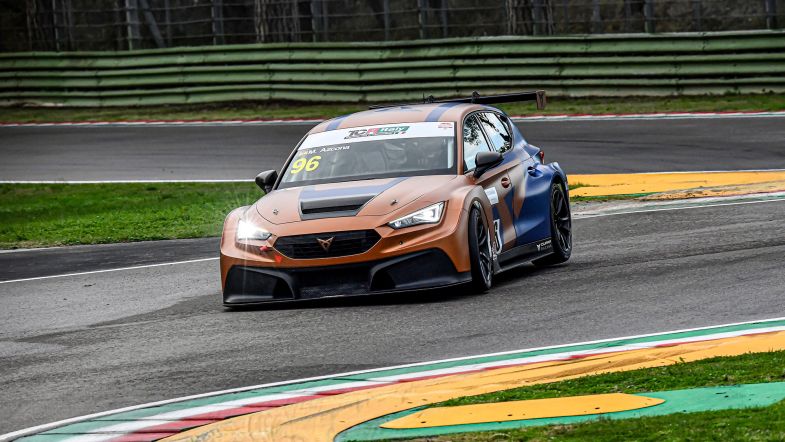 Mikel Azcona won the penultimate TCR Italy championship race of 2020 from seventh on the grid.

The Cupra driver benefited from the first lap chaos that saw pole sitter Jacopo Guidetti and points leader Eric Brigliadori going over the gravel at Turn 2.

Azcona was into the lead at Turn 4 and never looked back, winning the race by seven seconds over Jonathan Giacon.

Giacon made the move for second place as MM Motorsport team-mate Guidetti made a mistake on the second lap.

Instead Guidetti had to defend third from Hyundai driver Felice Jelmini. And Jelmini made the move stick on lap six, then holding the final podium position until the chequered flag.

Disaster struck title candidate Brigliadori who pitted from fourth with a technical issue on lap three to retire from the race.

The Audi RS 3 LMS driver shared the points lead with Salvatore Tavano ahead of the race. And Tavano started from the back of the grid to finish seventh, taking a big step towards securing the title ahead of the final race of the season tomorrow.

Ibragim Akhmadov finished fifth for MM Motorsport while Igor Stefanovski came out on top after a long battle for sixth with Nicola Baldan.

Baldan was forced to pit due to a technical issue with two laps left, dropping him down to 16th position.