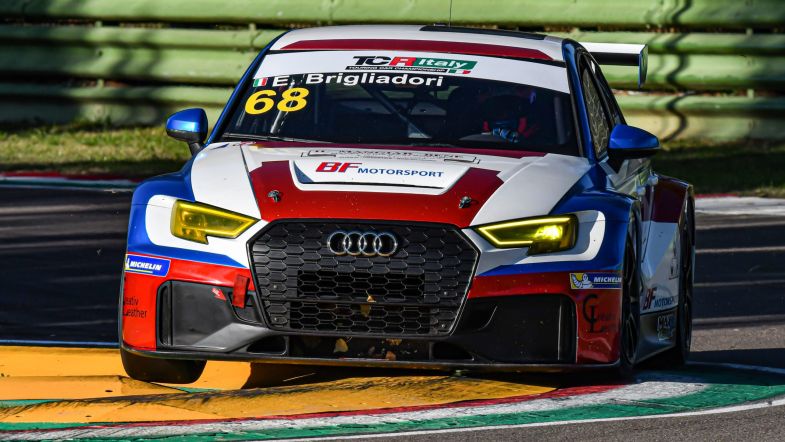 Mikel Azcona was once again in a class of his own to win the final TCR Italy championship race of 2020 while Eric Brigliadori finished second to claim the drivers’ title.

Azcona started from pole but was out-dragged into the first corner by Igor Stefanovski.

But the Cupra driver piled on the pressure and managed to reclaim the lead a couple of corners later.

Azcona kept the lead throughout the race despite a scary moment through Acque Minerali on lap 12 that put Brigliadori right on his rear bumper.

Stefanovski meanwhile found himself under pressure from Hyundai colleague Felici Jelmini in the fight for second place.

But Jelmini braked too late coming into Rivazza on lap two, spearing off into the gravel and touching the back of Stefanovski who was able to continue.

MM Motorsport driver Jonathan Giacon was next up to challenge Stefanovski for second.

And the two came together at Rivazza, resulting in a spin into the gravel for Stefanovski who dropped down to finish tenth.

Giacon was given a ten second penalty for the incident, but slowed down on lap seven and pitted with a technical issue.

Azcona won the race by 0.8 seconds over Brigliadori who scored enough points to beat title rival Salvatore Tavano who finished fifth. The duo finished on equal points, but with Brigliadori claiming the title thanks to more wins.

Jacopo Guidetti finished third behind the wheel of his Honda Civic Type-R TCR ahead of championship returnee Nicola Baldan.