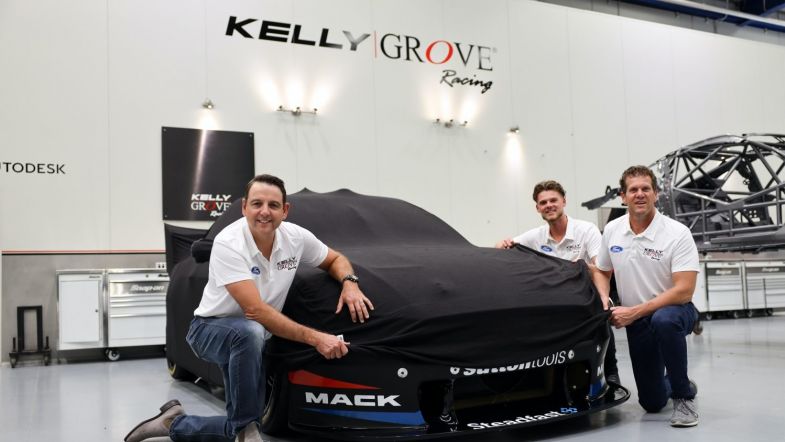 Kelly Racing will no longer have majority ownership from former Supercars drivers and brothers Rick and Todd Kelly, the team announcing today that the Grove Group have invested to become the new owners of the team.

Renaming to Kelly Grove Racing, it will be the first time since the team’s inception in 2009 that anyone outside of the Kelly family has majority ownership of the Braeside based outfit.

Stephen Grove and son Brenton are experienced racers, having won the last three Bathurst 12 Hour races in their class while Brenton made his Super2 debut in 2019, driving a Triple Eight Race Engineering prepared car.

Though not confirming who will partner Andre Heimgartner, entering his third season with the Kelly’s, in the second Ford Mustang seat, team principal Todd Kelly welcomed the Grove Group and their experience in business as well as motorsport.

“To put ourselves on a level playing field it was extremely important to have a partner come into the team who is like-minded and as passionate about racing as we are, and fortunately we’ve been able to find that partner in Stephen Grove,” Kelly said.

“The Grove Group, like most of our partners, is an extremely successful Australian-owned business which uses almost entirely Australian-made products which is important to Rick and myself.

“The Grove Group also has a vast amount of experience in motorsport with their Porsche and GT programs which will be a huge asset to the team.”

Steven Grove added that the upcoming Gen3 regulations for the Supercars Championship were a big catalyst for him to invest in a team and he feels the relationship with the Kelly family will work well.

“I’m excited to announce our strategic partnership with Todd, Rick and Kelly Racing for 2021,” Grove said.

“We decided to enter the Supercars Championship based on the series’ strong strategic roadmap forward with the Gen3 ruleset and the new TV rights agreement.

“It was clear that the opportunity to partner with Kelly Racing was the right fit for our business given the synergies in philosophy between Kelly Racing and the Grove Group.

“I believe that through our partnership the team can grow and develop to promote and reward our sponsors for their commitment in not only our team but our vision moving forward.”

The 2021 Supercars season kicks off on February 26-28 at Mount Panorama for the Bathurst 500 sprint race weekend, returning to where last year’s championship finished.