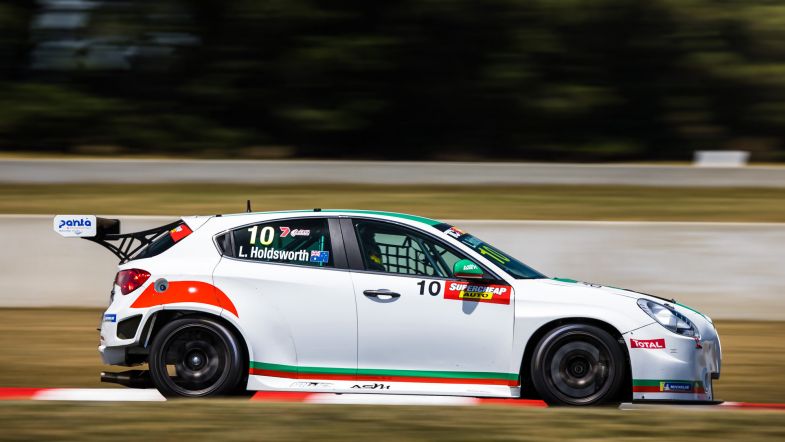 Landing the TCR drive only a few weeks ago after being dropped from Tickford Racing’s Supercars outfit, Holdsworth has bounced back with the fastest time in both qualifying sessions for this weekend’s races, heading a one-two-three result for Alfa Romeo in the process.

Having also qualified on provisional pole for his last motor race, last October’s Bathurst 1000, Holdsworth showed his one-lap speed can be transferred across categories by going faster than some of TCR Australia’s established names.

Cloud cover over the circuit made for quick times early on in the first 15 minute session, a majority of the field hitting the track hard in the opening five minutes to get tyre temperature.

Series debutant Luke King slotted his Audi RS 3 LMS to the top spot half way through the session with a 56.045, heading an Audi one-two with Supercars star Chaz Mostert dropping in behind the young gun.

Both were soon displaced by former Supercars driver Lee Holdsworth, his Ash Seward Motorsport Alfa Romeo Giulietta QV TCR completing a lap in 55.876 with less than a second covering the first 17 of 18 cars.

Aaron Cameron had a wild ride in the GRM Peugeot 308 TCR when he lost braking power into the Turn 4 hairpin, going through the gravel trap and onto an unused driveway to a local property before turning around to re-join the circuit unscathed.

Holdsworth and fellow Alfa Romeo driver Jay Hanson topped the standings at the end of the first session ahead of the Audi pair King and Mostert. After his brake drama, Cameron was in fifth with Josh Buchan, Jordan Cox, James Moffat, Michael Caruso and Brad Sheils.

Missing out on the top ten cut-off, Tony D’Alberto only just missed a chance to get through to the second session by finishing in 11th ahead of Ben bargwanna, Dylan O’Keeffe, Nathan Morcom, Michael Clemente, Jason Bargwanna, Zac Soutar and John Martin.

The final, second part of qualifying kicked off with the clock winding down from ten minutes, only the fastest ten drivers from the previous outing allowed out on track.

King drew first blood, his time of 56.111 halfway through the session setting the bar for others to chase though he was soon displaced by Holdsworth and Mostert, the two former Tickford Racing team-mates in Supercars breaking through the 56 second barrier with mid-55’s a piece.

The pair kept trading blows at the top of the order with Holdsworth standing his ground on provisional pole thanks to a lap of 55.646, soon joined by fellow Alfa driver Cox on the front row with Jay Hanson making it a three-way ahead of Mostert.

Holdsworth stayed at the top until the end of the 10 minute session, ending up on pole in his first start in the category ahead of Cox and Hanson in the top three. Mostert edged out Caruso for fourth while King, Cameron, Sheils, Buchan and Moffat completed the top ten order.

Race one for the championship starts at 16:58 local time with races two and three beginning at 11:13 and 15:27 tomorrow respectively.