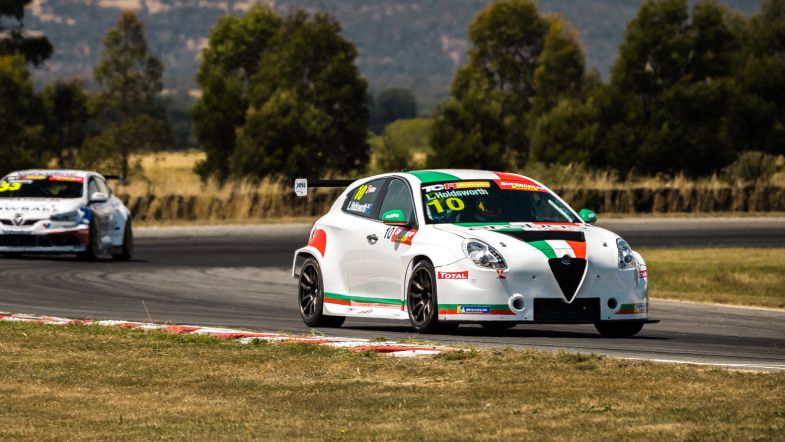 Lee Holdsworth has converted his first TCR Australia pole position to race victory in the first race of the 2021 racing season, holding off Jordan Cox to take first blood in his series campaign.

The ex-Supercars driver put in a near perfect drive despite losing the lead at the race start to convert a pole in qualifying to beat some of the established names in TCR Australia competition.

His win aboard the Ash Seward Motorsport Alfa Romeo Giulietta QV TCR marks the first win for a driver in the series since the end of 2019 given the series didn’t run in 2020 thanks to the COVID-19 pandemic.

A delayed start came thanks to Michael Caruso’s Alfa Romeo suffering electric problems, leading to the Garry Rogers Motorsport car being recovered from the grid which forced the field to complete another warm-up lap.

Cox got the jump off the line, getting the lead into the opening corners from polesitter Lee Holdsworth while young debutant Jay Hanson followed, making it three Alfa Romeo’s line astern on the opening lap.

Though a train of cars started to form behind Cox in the first few laps, leading to a bump from Holdsworth at the hairpin, the #25 Melbourne Performance Centre Audi RS 3 LMS of Chaz Mostert started to chip away at the lead pair after getting past Hanson, ranging in on his former Supercars team-mate Holdsworth.

After a few laps under Cox’s wing, polesitter Holdsworth moved into the lead at the end of lap six after a pass on the inside of Turn 6, leaving his fellow Alfa driver vulnerable to the rapid Mostert behind him. Hanson behind had a comfortable gap to fifth placed Aaron Cameron, the GRM Peugeot 308 TCR driver having a hard time keeping the MPC Audi of Luke King behind him.

While Holdsworth and Cox ran away at the front, Mostert continued to hold off Hanson for third until the 16-year-old made contact with the Supercars star heading into the Turn 4 hairpin, damaging Mostert’s Audi and dropping him to seventh place.

With the race being called early thanks to the start delays, Holdsworth came home to take the flag on lap 20 ahead of Cox and Hanson, making it an all-Alfa podium for the first time in the marque’s history in TCR Australia.

Races two and three tomorrow begin at 11:13 and 15:27 local time respectively, featuring rolling grids from the results of the previous race.