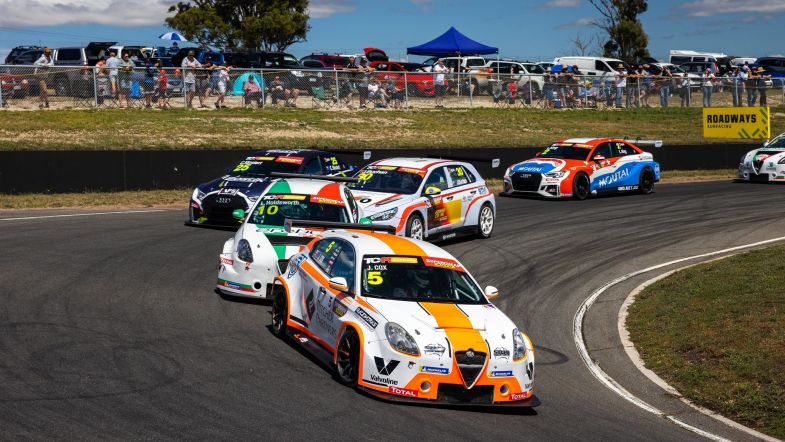 Jordan Cox has taken the championship lead in the TCR Australia Racing Series thanks to a second win on the second day of racing at Symmons Plains, clean sweeping the Tuesday running.

The Garry Rogers Motorsport driver was able to seemingly control the race from lights to flag in his Alfa Romeo Giulietta QV TCR thanks to a great start from pole position and clean air ahead of him, now going in to the next round with a four point lead over his next challenger.

Starting on pole thanks to his earlier race win, Cox completed his holeshot clean sweep of the round by again taking the lead into the opening turns, beating the other Alfa Romeo of Lee Holdsworth alongside him to Turn 2, the GRM car beating the Ash Seward Motorsport prepared machine.

Behind the leading pair the Melbourne Performance Centre team-mates of Chaz Mostert and Luke King had an Audi RS 3 LMS drag race to the first turns, King getting their first but running wide which allowed Mostert through to hold third place.

It didn’t take long for the leaders to check out and away from the pack, Holdsworth keeping Cox honest by under a second while Mostert behind just kept in touch but couldn’t close in on the Alfa Romeo duo, though the Supercars star was able to get a gap of over four seconds to his team-mate King within only a handful of laps.

The fight at the front raged on throughout the race with Cox unable to get a comfortable margin over Holdsworth though it was announced that the ASM driver would be given a ten-second post-race penalty for moving before the race start, five seconds being applied to his finish time.

Despite the penalty hanging over his head, Holdsworth took the lead from Cox with just over two laps to go but the GRM pilot kept close to the #10 Alfa Romeo, allowing him to take the win as Holdsworth dropped to third after his penalty was applied, giving Mostert another podium for the weekend.

On the final lap a major crash between two GRM cars took the shine off Cox’s win, the #17 Peugeot 308 TCR of Jason Bargwanna suffering a brake failure and speaking into James Moffat’s #34 Renault Megane RS TCR at Turn 6. Both drivers managed to emerge relatively unscathed from their cars after the race.

Round two of the championship will take place at the Phillip Island Grand Prix Circuit across February 19-21.