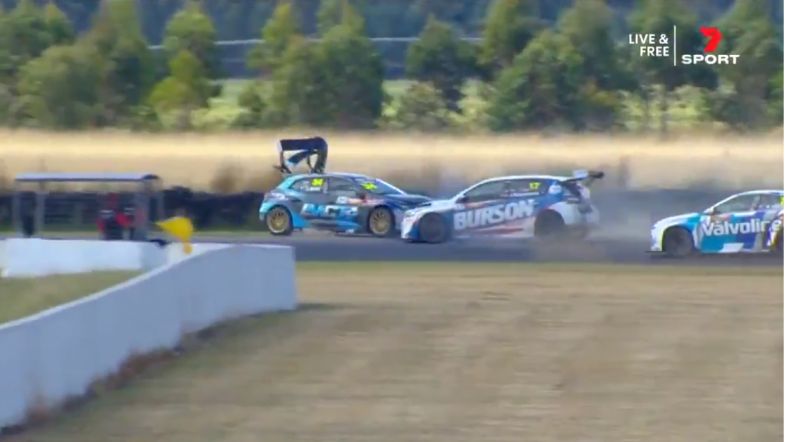 Exploded brake rotor believed to be behind Bargwanna-Moffat crash

Garry Rogers Motorsport driver Jason Bargwanna has put down his frightening last lap crash with team-mate James Moffat to an exploded front brake rotor on his Peugeot 308 TCR, spearing him through the grass and into the unsuspecting Moffat’s Renault Megane RS TCR.

The pair were engaged in a four-way scrap for position at the back of the top ten in the closing race of the round at Symmons Plains when Bargwanna’s car suddenly pitched hard left in the hardest braking zone on the circuit, the 2000 Bathurst winner able to rotate it 180 degrees before collecting Moffat at the apex.

Bargwanna’s belief about the rotor being at the cause of the crash was backed by team-mate Dylan O’Keeffe who was behind him in the sister Peugeot, ending up with cracks in his glass windscreen from the failed component.

Speaking after the crash to former TCR Australia driver turned pit reporter, Molly Taylor, Bargwanna was thankful to emerge from the crash unscathed with Moffat also able to get out seemingly unhurt.

“Gave you a fright? You should have been sitting where I was sitting, let me tell you,” Bargwanna said.

“The thing had been struggling a little bit in the last four or five laps with brakes so I was just trying to nurse it away.

“Those guys obviously had better brakes, so I couldn’t do much about it, but that last lap, coming through the kink, something exploded.

“So, I was trying to work out how we’re going to stop this thing and, I don’t know, I was aiming for a gap between the middle of everyone but that’s where it ended up.

“I’m really sorry for Moff but a bit of work for the guys here, but we’re all okay, so we’ll go again.”

It caps off a tough weekend for the Peugeot drivers after Aaron Cameron too struggled with braking issues aboard his GRM 308 during Monday’s running, twice ending up past the gravel trap at Turn 4 which is known to be a heavy braking point.

Moffat’s car will be written off before the next round at Phillip Island while the Bargwanna machine looks set to be repaired by the GRM team who enjoyed two wins over the round thanks to Jordan Cox in his Alfa Romeo Giulietta QV TCR.