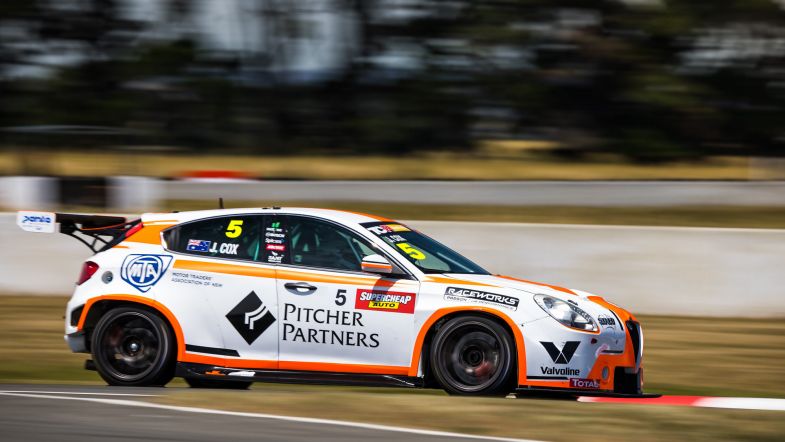 Jordan Cox has broken through for his first TCR Australia race win after threatening to do so in yesterday’s opening race of the season, taking his Garry Rogers Motorsport prepared Alfa Romeo Qiulietta QV TCR to the top step of the podium.

The former Improved Production star broke the TCR lap record at Symmons Plains multiple times en route to taking his third podium finish in the category, standing on top of the dais for the first time in his relatively short career in the category.

Starting from second on the grid, Cox took the lead into the opening turns when he beat the Ash Seward motorsport Alfa of Lee Holdsworth off the start line but it was Aaron Cameron from the second row who shot to second place aboard his Peugeot 308 TCR, the GRM driver getting past Holdsworth and slotting between his Alfa Romeo and that of new leader Cox.

Cox’s lead didn’t last long with Cameron making the move on cold tyres into Turn 6, taking first position as the field came across the line to complete the opening lap though it wasn’t long before the first yellow flag of the day came out thanks to a crash further back in the pack.

Coming to the start-finish line, Michael Caruso came across the front of fellow GRM driver Dylan O’Keeffe, the Alfa Romeo driver coming off second best and ending up in the wall while O’Keeffe continued on in his Renault Megane RS TCR.

Racing resumed at the start of lap seven, Cameron getting a jump on the pack and starting to pull away while Cox retained second ahead of Ash Seward Motorsport’s Holdsworth as Josh Buchon in fourth dropped two spots in his HMO Customer Racing Hyundai i30 N TCR to the Melbourne Performance Centre Audi RS 3 LMS’s of Chaz Mostert and Luke King.

Further back James Moffat made it an even more sorry day for GRM’s Renault arm as he ran in to the back of ASM driver Jay Hanson at the Turn 4 hairpin, causing damage to both cars and forcing both drivers to park up in the garage.

Back at the front of the field Cameron’s gap to the second placed car of Cox evaporated, the Alfa Romeo getting close to the back of his team-mate’s Peugeot as Holdsworth bought in to the battle, having shaken the Audi of Mostert behind.

Cox’s opportunity to seize the lead came on lap 14 when Cameron ran wide at the hairpin, getting out of the racing line which let the GRM Alfa through to the lead, soon followed by Holdsworth and Mostert as Cameron dropped back through the pack over the course of the next lap.

The former race leader proceeded to have a hard time as his Peugeot shut down on the back straight, though luckily he was able to limp back to the pits which allowed the race to keep running under green flag conditions.

Out front Cox was untouchable, resetting the lap record for TCR cars multiple times before taking the flag ahead of Holdsworth and Mostert with King and HMO driver Nathan Morcom rounding out the top ten.

Morcom’s team-mate Buchan held on to sixth place ahead of fellow Hyundai campaigner Brad Sheils while the father-son pairing of Jason and Ben Bargwanna sandwiched Honda’s Tony D’Alberto in ninth to make it a double top ten for the Bargwanna family.

Despite leading a majority of the race’s laps, Cameron came home the last of the running cars in 15th, giving the GRM driver a hard task to recover in this afternoon’s final race at 1520 local time.