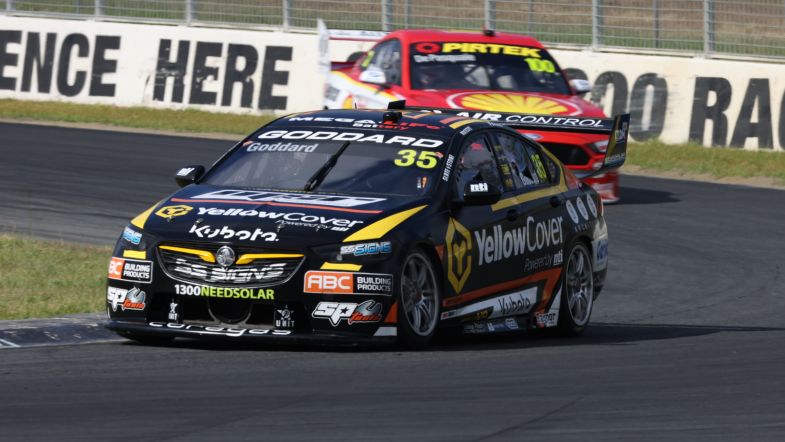 A solid, eight and a half hour of testing at Queensland Raceway has resulted in Matt Stone Racing’s Zane Goddard being listed as the quickest driver at the end of the long day, heading up the first official pre-season test.

As reported earlier in the day, Goddard set his quick lap early on in the morning and stayed up in the P1 spot for the rest of the day, beating out the seven other cars from MSR, Dick Johnson Racing, Triple Eight and Team Sydney with a time of 1:09.0257.

The 21-year-old also notched up 78 laps around the track affectionately known as The Paperclip, moving in to a full-time driving role this year after sharing driving duties with team-mate Jake Kostecki last season, and said he was happy with the outcome of the day.

“Really happy with it. Obviously on a test day it’s sort of hard to see what everyone else is doing,” said Goddard.

“I’m happy with it, it’s a good start to the year.

“It’s a never a bad thing to see your name at the top.”

“Obviously they’re the best in the business, they’ve been doing it for a long time.

“Especially last year when I was new to it all, it’s hard not to get starstruck.

“At the end of the day, they’re your competition, and one day, you want to be out there beating them.

“At this point I’m still climbing the ladders and you’ve got to learn from the best.”

Apart from the co-drivers in attendance, Goddard and Kostecki put in less laps through the day than anyone else other than Team Sydney recruit Fabian Coulthard, the Triple Eight pairing of Shane van Gisbergen and Jamie Whincup doing over 100 laps each.

Next week’s planned test day at Winton Raceway for Victorian teams has been postponed until the 19th of February due to a five-day lockdown in the state of Victoria from midnight tonight.