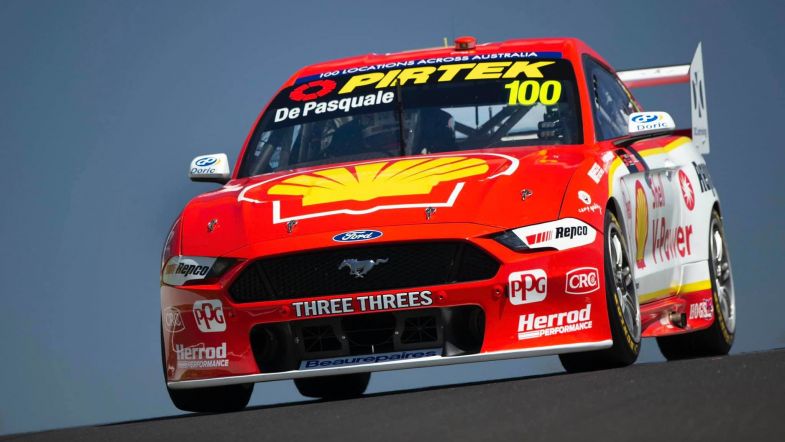 On his debut with new team Dick Johnson Racing, Anton de Pasquale has taken provisional pole for today’s opening race of the Supercars Championship season at the Mount Panorama 500, going quickest in the morning qualifying session ahead of the Top Ten Shootout.

Punching in his quickest lap of the weekend after the chequered flag had dropped, de Pasquale progressed through the session to go just over a tenth quicker than the next fastest car to have the privilege of being the last car on the road in the shootout.

In contrast to Friday’s hot and clear conditions, the Saturday morning qualifying session started under the cover of clouds with the lowest track temperatures so far, ideal for setting quick times as the 24 drivers looked to vault themselves into the Top Ten Shootout.

Thanks to a tow down Conrod Straight from Triple Eight team-mate Jamie Whincup, Shane van Gisbergen was the first to set a fast representative time , posting a 2:04.7580 on his second flying lap.

A red flag was brought out just over seven minutes in to the session, Nick Percat’s Brad Jones Racing entry coming to a halt at the exit of Hell Corner thanks to an electrical issue. The team was able to quickly retrieve the stricken Holden Commodore, leading to a quick restart with just over 12 minutes remaining.

Both the Friday pace-setting Walkinshaw Andretti United car of Chaz Mostert and new Dick Johnson Racing recruit Anton de Pasquale came close to toppling van Gisbergen, putting in the quickest first and second sectors respectively, but neither could take the #97 off the top of the timesheets.

The whole field rolled back out to start their final flying laps with just over two minutes to run, the timing screen lighting up with purple sectors but it was de Pasquale who was able to piece a lap together, mustering a 2:04.4250 to take provisional pole in to the shootout.

van Gisbergen was unable to improve, ending the session in second as Tickford’s Cam Waters finished third ahead of Mostert and the Blanchard Racing Team’s Tim Slade. Brodie Kostecki makes it in to the shootout on his full-time debut ahead of DJR’s Will Davison with the Team 18 cars of Scott Pye and Mark Winterbottom sandwiching Whincup.

The Top Ten Shootout which finalises the grid will get underway at 1210 local time ahead of the opening 250km race of the season, getting the green flag at 1500.