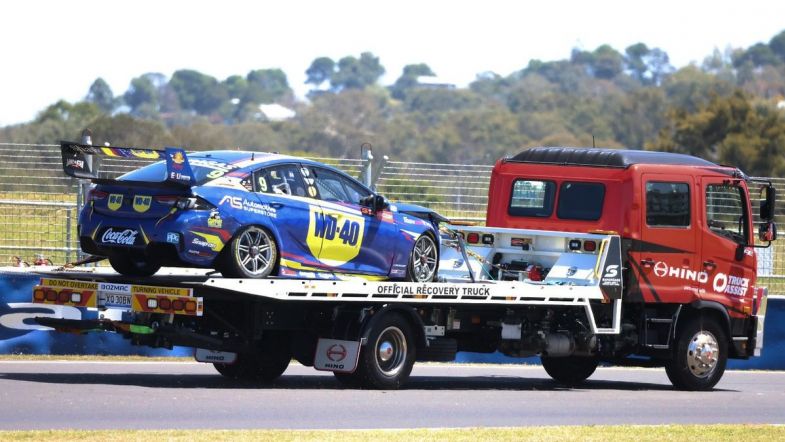 Will Brown to make Saturday qualifying despite practice crash

Erebus Motorsport will be burning the midnight oil to repair Will Brown’s Holden Commodore after a practice crash halfway through the first session of the 2021 season put the #9 car in doubt to make the rest of the weekend at Mount Panorama.

Hitting the inside wall at The Dipper after suffering understeer throughout the session, Brown ricocheted across to the outside wall which caused major damage to the front and rear of the WD-40 backed machine.

Sitting third on the timesheets at the time of the accident, Brown was still pleased with his maiden outing as a main driver after previously campaigning in the Super2 series and winning the 2019 TCR Australia championship.

“The cars were quick, we were driving well,” he said post-crash.

“Just a complete balls-up on my half. I’m not going to let it get us down, it’s one of those things.

“You definitely shouldn’t do it as a rookie, I did everything wrong as a rookie.

“I was just getting a lot of understeer through there on all my other laps and I sort of tried to turn in early to try stop the understeer and get in a bit closer.

“Turned in a bit too early in the end and did that. It’s really disappointing, I’m probably out for the weekend now.

“It sucks for the team, it sucks for everyone but we’ll keep our chins up and keep swinging on.”

Team boss Barry Ryan was supportive of the 22-year-old who this year is one of the two new drivers in the Erebus squad, driving alongside fellow rookie Brodie Kostecki.

“It’s alright, he has having a crack, he was third in the session,” Ryan said.

“We’ve told him to go out and have fun and go fast.

“It’s what he was doing, so no drama.

“But they’re both saying the cars are really good.

“Will’s showing the car is fast, and Brodie is fast, so no dramas with us.”

Before the second practice session of the day Ryan stated that the team will put their efforts behind Brown to get the car out for qualifying, Brown ending opening practice in 15th despite missing out on the second half.