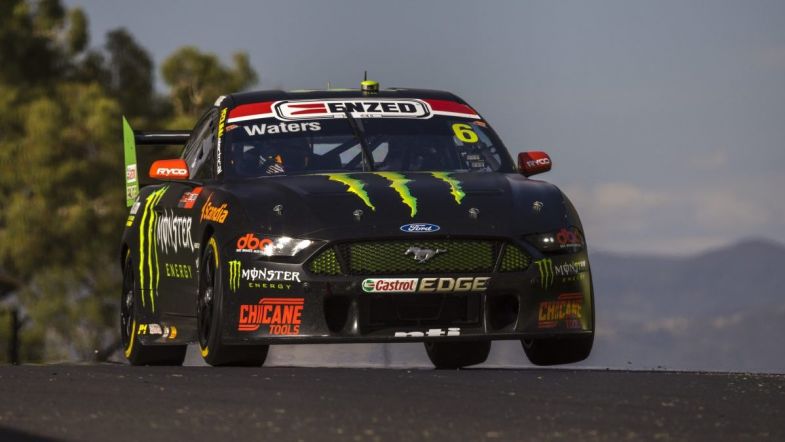 Cam Waters takes another Bathurst pole ahead of season opener

Cam Waters has gone back-to-back with Supercars pole positions at Mount Panorama as the Tickford Racing driver took the prime spot in today’s Top Ten Shootout ahead of the season opening 250km race.

Carrying on his form from the end of last season where he started on pole for the Bathurst 1000, Waters was again quickest in the pre-race shootout after edging closer and closer to the top of the timesheets over the weekend so far.

Provisionally qualifying third, the #6 driver was able to put in a faster lap than stablemate Tim Slade who held the top spot for a good portion of the session and will start alongside Waters in the #3 Blanchard Racing Team entry.

The clouds which had previously covered the circuit in qualifying had since burned away, meaning the sun was starting to bake the tarmac leading to a change in the grip characteristics of the circuit.

Mark Winterbottom was the pioneer on track, his 2:06.5672 almost two seconds off the pace of the provisional pole time for qualifying but the Team 18 driver had set the bar for the rest of the field to chase.

Triple Eight’s first car of Jamie Whincup was up next, the #88 car going four-tenths up on Winterbottom in the first sector to help him put in a time of 2:06.1164, almost a second down on his qualifying effort.

Winterbottom’s Team 18 team-mate Scott Pye was the next on track, a scrappy first sector hurting his final lap time of 2:06.9479, putting him behind Winterbottom on the grid.

Will Davison was the next on the road in his first event since 2008 with Dick Johnson Racing, taking the reins of car #17 which has won the yearly pole award since 2017 in the hands of Scott McLaughlin. Despite small contact with the outside wall at The Cutting, Davison was quick over the top of the mountain, culminating in a 2:06.0079 to put him on provisional pole.

Full-time Supercars rookie Brodie Kostecki hit the track for his first ever Top Ten Shootout in only his sixth main game start, a solid lap putting him between Whincup and Winterbottom on a 2:06.1814, under a tenth down on seven-time champion Whincup.

The Tickford Racing prepared car of Tim Slade put in a faster first sector than Davison on his shootout lap, adding on the best middle and last sectors of the session that point to do a 2:05.7050, putting the Blanchard Racing Team car onto provisional pole by three-tenths.

Friday’s pace-setter Chaz Mostert started the run to the end of the shootout, the Walkinshaw Andretti United car not looking settled to start the lap but a fastest middle sector showed the #25 had pace with a final time of 2:06.0449 squeezing Mostert between Davison and Whincup.

Bathurst 1000 polesitter Cam Waters succeeded his former Tickford team-mate Mostert on track, taking part in his 22nd consecutive shootout. Waters went over two-tenths quicker than team-mate Slade across the middle sector and taking the provisional pole on a 2:05.5980.

Defending Bathurst 1000 champion Shane van Gisbergen was the penultimate runner in the shootout, going fast and loose to start the lap with a purple sector approaching Reid Park. Losing time in the middle sector, van Gisbergen had to hustle the Triple Eight car in the run to the flag but ended up down on both Tickford cars at 2:05.7608.

Finally provisional pole winner Anton de Pasquale rolled out for his first shootout with Dick Johnson Racing, a tidy opening to the lap undone by dropping two wheels off the road at McPhillamy Park and an average final sector, resulting in a time of 2:05.7793 which dropped him between van Gisbergen and team-mate Davison.

The first race of the year will start at 1500 local time, running for 40 laps around the iconic Mount Panorama Circuit.