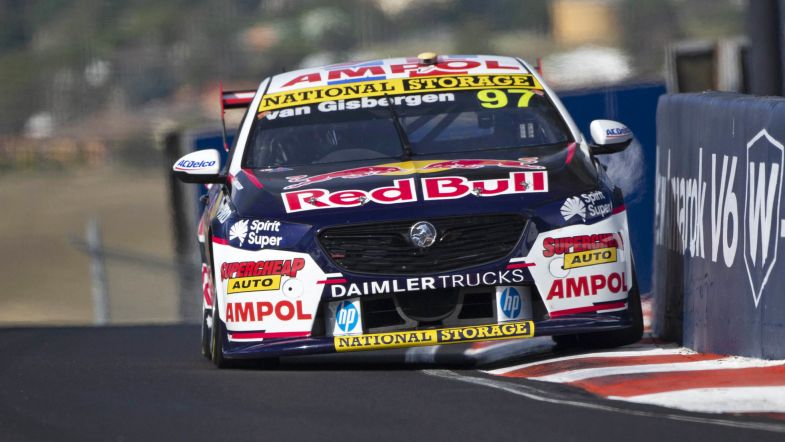 Shane van Gisbergen has carried on from where he left off at the end of last year’s Supercars Championship season by taking out the first race of the 2021 year, the Triple Eight driver dominating the opening 250km hit-out to take 150 points home.

Backing up the win he had in the 2020 Bathurst 1000, van Gisbergen challenged polesitter Cam Waters early on as the Tickford Racing man seemed to dictate the pace of the race, staying in front of van Gisbergen but not running away with the race.

It wasn’t until the first safety car in the opening ten laps of the race that the race was turned on its head, Anton de Pasquale hitting the wall at The Cutting on debut for Dick Johnson Racing after running up in third place, making the mistake all on his own with no pressure around him.

When the field hit the pit lane, van Gisbergen was right under Waters’ rear bumper but a slow stop for the Tickford car meant that it was the #97 Triple Eight car that prevailed. Before the race went back to green, Waters was pulled in to the garage with a power steering issue, dropping him to the rear of the field multiple laps down.

Despite being pressured by the Walkinshaw Andretti United car of Bryce Fullwood after the restart, van Gisbergen was able to pull away even though Fullwood had taken a much shorter pit stop before the safety car period thus being lighter with less fuel onboard.

van Gisbergen opened up a large margin to the field behind him heading in to the second and final round of stops, some 11 seconds ahead of second-placed WAU driver Chaz Mostert while the Ford Mustangs of Will Davison from DJR and the Blanchard Racing Team’s Tim Slade fought for the final spot on the podium.

A later pit stop for Mostert brought the #25 closer to van Gisbergen’s #97 towards the end of the race, setting the fastest lap of the 250km outing in the process while trying to hunt down the leader in the closing laps.

Further back, Slade started to work his way towards the back bumper of Davison, both drivers having sat out a majority of the 2020 season until the Bathurst 1000 as drivers though enjoying a healthy margin on the road to Fullwood in fifth, some ten seconds behind them on the road.

Slade was getting close until he made an error coming up to Forrest Elbow, whacking the wall and taking the BRT car out of the race with major left hand side damage. The race remained green as Slade was able to move the car off the track, allowing Davison to take third without any pressure.

For fourth place, Fullwood started to come under pressure from Mark Winterbottom with the Team 18 car getting past at Hell Corner with only two laps to go, putting the sophomore driver down to fifth place with both unable to challenge Davison for a podium spot.

Mostert was able to whittle down the gap to van Gisbergen to just under two seconds by the end of the race but it wasn’t enough, the Kiwi going back-to-back at Bathurst over 100 days apart. Davison came home for third in his full-time return with DJR as the order behind him for fourth and fifth stayed the same.