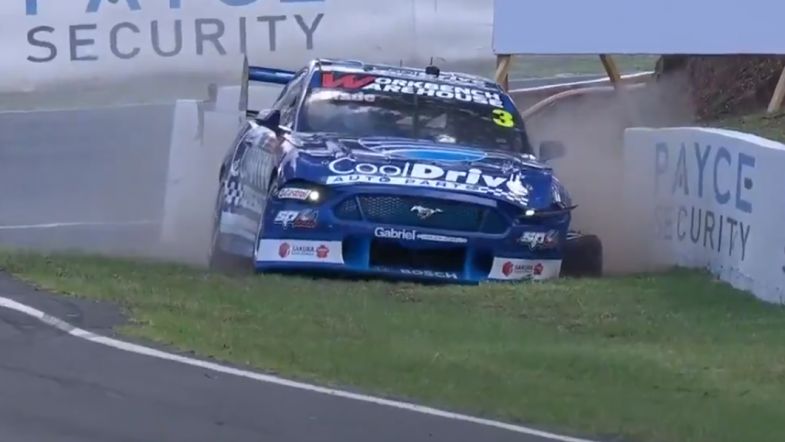 Tim Slade out of Bathurst weekend after opening race shunt

The #3 Blanchard Racing Team car of Tim Slade has been scratched from the remainder of the Mount Panorama 500 weekend thanks to a late-race crash in the opening outing of the season.

Slade has qualified in second and was running strong in fourth place with only a handful of laps to go, applying pressure to the Dick Johnson Racing car of Will Davison until he got crossed up on the run to Forrest Elbow, whacking the outside wall and causing heavy damage to the entry.

Subsequent investigations by the team after the car was returned to their garage confirmed their fears that the chassis can’t be fixed for tomorrow’s race, taking Slade out of the race weekend.

Post-crash a devastated Slade said that a potential issue with the gearbox pulling a false neutral was the likely cause of the incident, the car visibly losing rear grip into the right-hander on approach to the tight left.

“We were having a pretty solid race, lost the clutch there at the start of the race, hence the bad start,” he said.

“We had a pretty speedy car and didn’t really have much more to get past Will there.

“I went to downshift in the normal spot, and it went into a sort of neutral, and I went to grab it again and it’s gone two gears at once.

“It’s gone to first instead of second, and sort of compression-locked the rears and sent me into the fence.

“I’m absolutely shattered for the rest of the team.

“It was a pretty massive hit. I doubt we can fix it.”

Team owner Tim Blanchard said he was still proud of the team’s efforts regardless of the result at the end of the day, having challenged the top teams in his squad’s first appearance as a standalone operation.

“I kind of said to the boys before the race that we’ve done a lot more than we thought we’d been able to achieve this weekend, so whatever happened in the race is a bonus,” he said to Supercars Media

“Obviously not the way we wanted to finish, but we’re five laps away from finishing in the top five in the first race.

“Three months ago we had nothing, we didn’t even have a workshop so we’ve got to hold our heads high.

“Disappointing but it’s part of the process.”

The team will have to take the car back to their Box Hill base in Melbourne to determine what repairs they’ll need to make before the next round at Sandown, running from March 19-21.