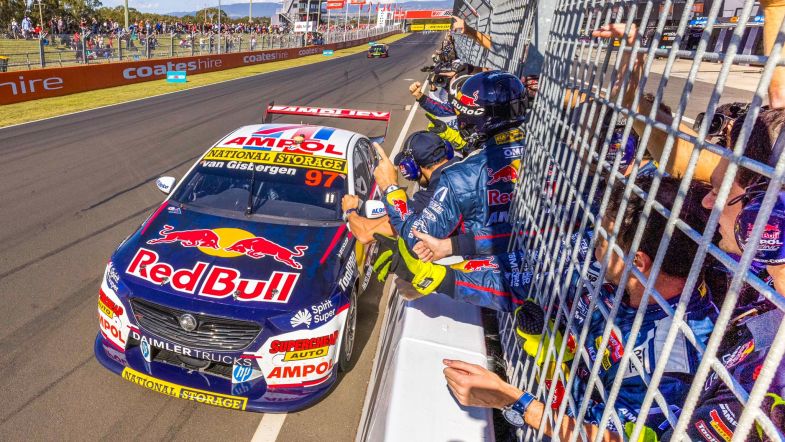 “The way it started, the team’s been really good, and working with Cauchi’s been awesome,” said van Gisbergen, who has a new engineer for 2021, David Cauchi.

“The atmosphere in the team’s really good.”

The Triple Eight Race Engineering driver qualified third for the first race and quickly made his way into the lead to win, although with Chaz Mostert closing the gap towards the end.

The second race saw him starting from pole position, but lost the lead at the start to Cam Waters. But there was no stopping van Gisbergen at Bathurst this weekend, winning the second race by more than six seconds over Waters.

“We have what we have this year. Qualifying’s been really close between the two brands,” said van Gisbergen.

“I feel like it’s been pretty even, and it’s been an awesome battle between three or four of us in qualifying. Racing super close, I love it.”

Mostert is closest to van Gisbergen in the standings, leaving Bathurst with two podiums and a 33-point gap to the top.

“Super stoked to get another podium today in the Mobil 1 Appliances Online rocket, just a really nice way to start the year,” said Mostert.

“We’ve still got some work to do, but it’s nice to have the tools in the toolbox to work with, so I’m really excited to get down to Sandown in a few weeks, I really like it there.

“Really nice to see the hard work of the team turning into results, so can’t wait to see what we can achieve together.”