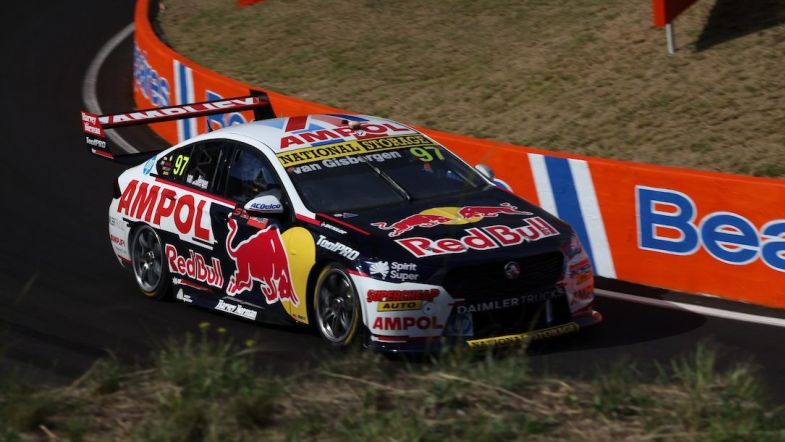 Carrying on from the pace which saw him draw first blood in the championship and take home 150 points a day ago, van Gisbergen’s time means he gets the advantage of studying his competitors in the shootout as well as having the psychological advantage of holding the fastest time of the day so far.

Yesterday’s polesitter Cam Waters set the benchmark to be chased with just under 10 minutes to run, the Tickford Racing driver posting a 2:04.7081 putting him three-tenths clear of Anton de Pasquale who was on the bounce back after a crash in the opening race which took the Dick Johnson Racing car out of podium contention.

With one second covering the top ten cars and some within that group being even closer, a majority of the field rolled out for their final flying laps late in the session to buy a ticket into the shootout.

Chaz Mostert provided an answer to the time set by Waters, putting the Walkinshaw Andretti United car on provisional pole but he was soon eclipsed by van Gisbergen, the Kiwi posting a time only eight-hundredths of a second faster than yesterday’s runner-up to secure the prime spot in the shootout.

Less than a tenth of a second split van Gisbergen, Mostert and Waters in the top three with the DJR cars of de Pasquale and Davison taking fourth and fifth. Making the shootout, the Team 18 car of Mark Winterbottom, Tickford Racing’s James Courtney, Triple Eight’s Jamie Whincup, and the Kelly Grove Racing cars of David Reynolds and Andre Heimgartner all squeezed in to the final outing before the race.

The Top Ten Shootout starts at 1210 local time with the final race of the weekend getting the green flag at 1500.