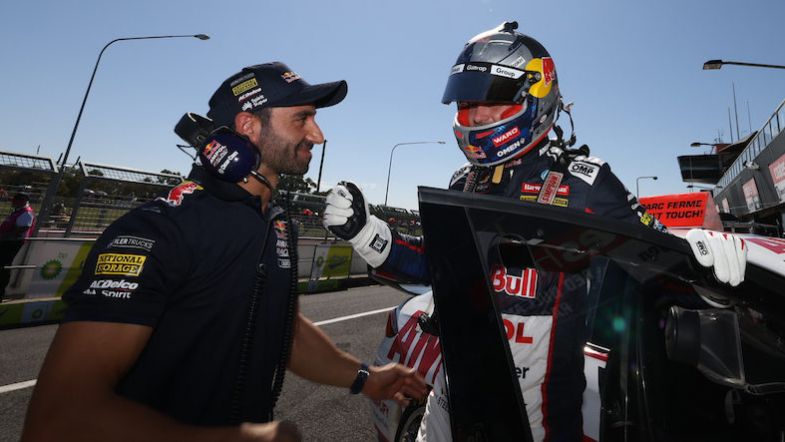 Shane van Gisbergen has converted provisional pole in qualifying to being the fastest driver in the Top Ten Shootout, meaning the Triple Eight driver will start from the best spot in today’s 250km race at Mount Panorama.

Coming off the back of a race victory yesterday and the fastest time from this morning’s 20-minute qualifying session, van Gisbergen was the last and quickest car on the road in the shootout, just marginally up on his rivals as less than two-tenths split the top three cars.

Higher track temperatures than the morning session and yesterday’s shootout led to slower lap times with the opening cars struggling to set fast times as they rolled out onto the track.

In his first shootout appearance of the year, Andre Heimgartner got the ball rolling for Kelly Grove Racing but his time of 2:07.3964 was far off the qualifying time he had set to get in to the top ten.

KGR team-mate David Reynolds was next up in his 54th Supercars shootout, only marginally faster than Heimgartner throughout the lap but closing it off better to put in a 2:07.2222, still nearly two seconds down on his qualifying lap.

Jamie Whincup rolled out third to put in his shootout lap, making a few small errors in the first sector thanks to a loose Triple Eight car. The seven-time champion was still down on Reynolds as he hit Conrod Straight, making up a chunk of time to finish the last by doing the first sub-seven time, a 2:06.9558 pushing the #88 on to provisional pole.

Tickford Racing’s James Courtney rolled the #44 entry onto the circuit in pursuit of Whincup’s time, driving much cleaner over his tour of Mount Panorama to move to the top spot on a 2:06.7380.

Sent out on green tyres, Mark Winterbottom pushed the Team 18 Commodore to the edge of grip, making small improvements on the time set by Courtney which culminated in a time just 0.0492 faster than the Tickford entry.

Dick Johnson Racing’s first of two cars in the shootout was next, Will Davison buoyed by a podium in yesterday’s race on his full-time return to the category. In his 50th shootout appearance, Davison made use of roaded Dunlop tyres to put in the best sector splits so far, his time of 2:06.3136 a massive improvement on the top laps to that point in the session.

Anton de Pasquale took provisional pole in qualifying on Saturday but would have to topple his DJR team-mate Davison to got to the top spot on Sunday. Purple sectors all around led to a half-second advantage over Davison, posting the new benchmark of 2:05.8009 for the last three cars to chase.

Saturday polesitter Cam Waters was the first car to try and take de Pasquale off pole position, the Tickford Racing team bolting on new Dunlop tyres which let him match the best first sector time. An even faster second split gave Waters an edge in the run to the flag, ending up just 0.0695 faster than de Pasquale.

Penultimate runner Chaz Mostert wanted to put his Walkinshaw Andretti United machine on pole after a run to second place in the opening race of the season, getting close to his former Tickford team-mate Waters to start the lap but a fight for grip over the top put him down on the best time, fighting back too hard to finish the lap which dropped him between Davison and Winterbottom on a 2:06.4599.

Finally the fastest qualifier in van Gisbergen went out to close the shootout, the reigning Bathurst 1000 champion smashing the time of Waters in the opening portion of the lap but losing time across the top of the mountain, forcing him to go all-out to close the lap and take pole with a 2:05.6175, just a tenth quicker than his rival.