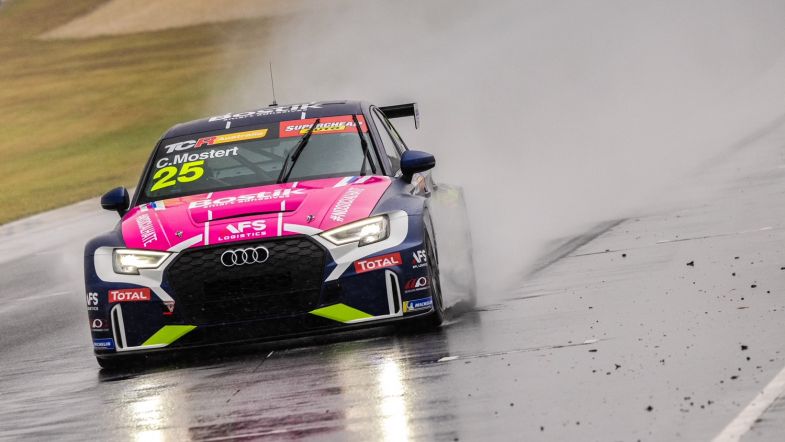 Chaz Mostert produced a dominant display in the opening TCR Australia race of the weekend at Phillip Island as he converted pole position into a fine lights-to-flag victory.

Whilst qualifying earlier in the day had been held in dry conditions, the weather had – as expected – taken a turn for the worse by the time the opening race of the weekend came around, with drivers faced with a wet circuit that included numerous pools of standing water.

Despite the rain, the field made in through turn one unscathed on the opening lap as Mostert retained the lead in his Audi having qualified on pole position, although team-mate Luke King was unable to hold off the challenge of Lee Holdsworth as he moved the first of the Alfa Romeos up into second spot.

Michael Caruso however, who had started alongside Holdsworth on row two, found himself going backwards down the order through the opening lap and soon found himself right at the back of the field.

Zach Soutar also found himself in trouble on lap three, getting out of shape onto the grass going into turn four but luckily avoiding being collected as he rejoined.

Out front, Mostert was in a class of his own as he romped away from the pack behind, establishing a lead of nearly ten seconds by the end of the fourth lap as Holdsworth edged away from King in the fight for third.

John Martin was also within striking distance of the podium places in fourth, with Tony D’Alberto working his way up into fifth – helped by and for Nathan Morcom that forced him into the pits in the HMO Customer Racing Hyundai.

Holdsworth’s hold on second would last until the sixth lap when King managed to put his Audi down the inside going into turn ten to get ahead, with the Alfa Romeo then coming under increasing pressure from Martin.

Further down the top ten, points leader Jordan Cox was benefitting from the conditions as he recovered from his below par qualifying performance, climbing up into the top eight before the race reached the half way stage. However, when he had a moment at turn four, both Jason and Ben Bargwanna were able to sneak through as the Alfa Romeo man slipped back to tenth.

Heading into the final third, Mostert’s lead had opened up to more than 25 seconds over team-mate King, with Holdsworth managing to keep Martin at bay in the battle for the final place on the podium.

In fact, positions within the top ten had become largely static; the main drama surrounding Josh Buchan as he survived twice running off at turn four to keep himself running in seventh spot.

With the rain leading to the race running a lap shorter than scheduled, Mostert duly wrapped up a dominant victory as he crossed the line more than half a minute clear of King – securing the biggest win in the series date and posting a fastest lap more than two seconds quicker than anyone else.

“It was good fun,” Mostert said. “The track was scary in places with standing water but I enjoyed it. From pole, you want to take advantage from the clear track in front and it all went to plan.”

Behind the Melbourne Performance Centre pair, Holdsworth saw off the challenge of Martin to take fourth sport, with D’Alberto coming from tenth on the grid to fifth and Aaron Cameron rounding out the top six.

Despite his various moments, Buchan held off Jason Bargwanna for seventh, with Ben Bargwanna and debutant Lachlan Mineeff completing the top ten; the latter coming from the back of the field and being aided late on by points leader Cox running off at turn four to drop down to 13th spot.

That resulted in Cox losing his advantage in the standings as he drops down to third place, with Holdsworth now leading the way by six points from Mostert, who moves up to second by virtue of his win.