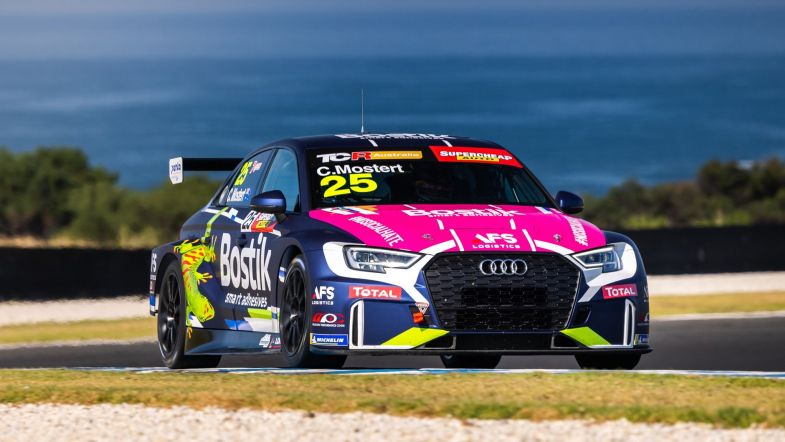 Chaz Mostert made it two wins from two in the second meeting of the TCR Australia season at Phillip Island, but only after the Supercars regular was able to overhaul team-mate Luke King after a race long battle between the Audi pair.

Having dominated the opening race on Saturday, Mostert again started from pole in the Melbourne Performance Centre Audi and once again the Supercars regular made the best start when the lights went out to keep the lead from a fast-starting Peugeot of Aaron Cameron.

Cameron then quickly cleared Mostert to move into the lead by the time the field reached turn four, whilst behind, Lee Holdsworth had slipped to the back of the pack having failed to get away when the lights went out after his car stalled.

By the end of lap one, Mostert had slipped back to third spot after losing out to team-mate King, who then set about making his move for the lead, sweeping around the outside of Cameron through turn one to take the inside line into turn two.

Cameron however then fought back into turn four to reclaim the lead; the battle for the lead proving to be a hard fought affair compared to the wet opener.

King once again managed to make a move for the lead heading into lap three as the Audi proved to have superior pace at the end of the start/finish straight, with Cameron unable to respond this time as he found his mirrors full of Mostert.

Mostert tried to make a move up the inside at turn ten but Cameron had the right line through eleven and twelve to retain the place, with King taking the opportunity to ease away into a slender lead.

Mostert then tried again going into turn one on the following lap and managed to hold a wild moment that could have taken both him and Cameron off track before eventually making a move a stick into turn four to pit the Audis into first and second.

Down the order, former points leader Jordan Cox was forced to park his Alfa Romeo after contact in the pack with Josh Buchan’s Hyundai, whilst Cameron’s hold on third wouldn’t last long as Honda pair John Martin and Tony D’Alberto both managed to sneak ahead of the Peugeot.

Once clear of Cameron, Mostert set about chasing after King and heading into lap six, the pair were together on track – and closing in on Holdsworth’s Alfa Romeo, which had pitted at the end of lap one.

Mostert briefly managed to get ahead when the front two ran side-by-side on lap seven but King managed to hold on, with the pair opening a gap over Cameron, who had managed to fight his way back ahead of Martin and D’Alberto, with Jason Bargwanna rounding out the top six.

As a train of cars started to build behind Cameron in the battle for the final step on the podium, King was continuing to place his RS 3 LMS in the ideal position lap-after-lap to keep Mostert at bay.

Going onto lap eleven, Mostert was almost alongside King but couldn’t quite make the cut-back work at turn two, and then saw King put his car right in the middle of the road into turn four to prevent Mostert from trying to dive down the inside.

Heading onto the following lap, Mostert again tried to make a move for the lead but put two wheels onto the grass and suffered a huge slide going into turn one which he somehow controlled to stay fixed onto the rear of King’s car.

With the race one winner clearly quicker in the final part of the lap, Mostert again looked to set up a move going into lap 13 and tried to go around the outside at turn two. Although on the outside for turn three, that gave Mostert the inside line into turn four and he finally made the move stick to take the race lead.

Behind, Martin had now reclaimed third with D’Alberto back into fourth, with Cameron facing pressure from Bargwanna and the impressive Michael Clemente in his privateer Honda.

Through the final lap, Mostert managed to open up a slender advantage over King as the Audi duo once again secured a 1-2 finish – as they had done in the opening race.

Martin took third from D’Alberto with the pair twelve seconds behind, with Bargwanna and Clemente rounding out the top six after Cameron slipped back in the closing laps.

Zac Soutar was another driver to produce a strong start to Sunday’s action as he took eighth, with Ben Bargwanna and Nathan Morcom rounding out the top ten; the latter bouncing back from his disappointing outing in race one.

Aside from Buchan and Cox, James Moffat ran into problems when he was forced to bring his Renault into the pits with damage to the front end, with James Hanson’s Alfa Romeo also requiring a stop that dropped him off the lead lap.

Mostert now leads King by 18 points in the standings, with Holdsworth slipping to third – 24 points in arrears.