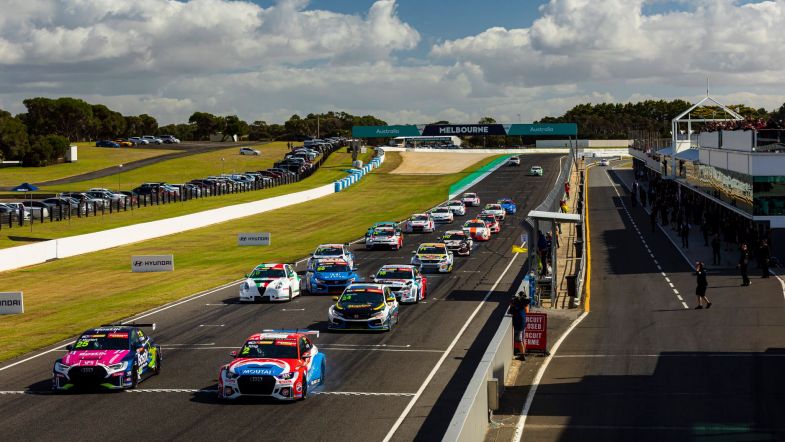 Jason Bargwanna overcome a mid-race error at the fastest part of the Phillip Island circuit to secure a maiden TCR Australia victory in the third and final race of the weekend.

Luke King made the best start from row two to blast into the lead ahead of Mostert but then it all went wrong going through turn two, with the #19 Audi suddenly sliding off track on cold tyres to drop right to the back of the field.

That left Mostert back out front ahead of the Wall Racing Honda of Tony D’Alberto and Bargwanna’s Peugeot, with the pair swapping places on lap two when Bargwanna slipped up the inside going through Lukey Heights.

Aaron Cameron and Michael Clemente meanwhile held fifth and sixth, with the privateer Honda racer putting huge pressure on the Peugeot ahead.

King’s early mistake meant Mostert was free to try and build a lead at the front, and the Melbourne Performance Centre racer was soon easing away from Bargwanna behind, with the Peugeot in second spot also starting to gap D’Alberto as the main focus turned to positions lower down the top ten.

Clemente was able to make his move to get ahead of Cameron into fifth on lap sixth, and he was soon followed by Dylan O’Keeffe, who was enjoying his strongest outing of the weekend in the Renault Megane and blasted through into sixth going into turn one on the following lap.

Cameron would prove to be something of a cork in the bottle as a train of cars started to build behind, with Nathan Morcom the next man to find a way through.

As Mostert continued to lead the way, there was drama for Bargwanna when he ran wide through turn one and took a trip across the grass heading into turn two, rejoining without contact but with plenty of grass in the front intake on the Peugeot.

Despite that, the veteran was suddenly reeling in Mostert’s Audi ahead, and going into lap eleven had closed right onto the rear of the two-time winner.

As Bargwanna started to increase the pressure, Mostert suddenly started to slow as the front-right tyre let go just as he started lap twelve – leaving him to complete a slow lap to the pits and ending his hopes of a hat-trick.

Mostert’s issue left Bargwanna with a clear lead over D’Alberto, with a charging Morcom working his way up into third spot heading into the final lap.

With Bargwanna having managed to put the lapped Alfa Romeo of Lee Holdsworth between himself and the chasing pack, the Peugeot man wrapped up a first win for both himself and the 308 TCR, with D’Alberto managing to keep Morcom at bay for second spot.

Third for Morcom was still his best result of a difficult weekend ahead of Martin and Clemente, with Ben Bargwanna managing to complete the top six having got ahead of O’Keeffe’s Megane.

Jay Hanson, another driver to suffer his fair share of misfortune, ended his weekend with eighth, with the top ten completed by Josh Buchan and Cameron.

After his lap one mistake, King managed to get back up to 15th at the finish, whilst Mostert ended up down in 18th after his pitstop.

A tough weekend for Jordan Cox, who headed the points after round one, saw him fail to take the start as a result of damage sustained in race two. Fellow Alfa Romeo driver Michael Caruso was forced to start from the pitlane after an issue with the chassis on his car was found shortly before the start.

Mostert ends the weekend 15 points clear of King, with Holdsworth ten points further back in third spot and D’Alberto up into fourth.