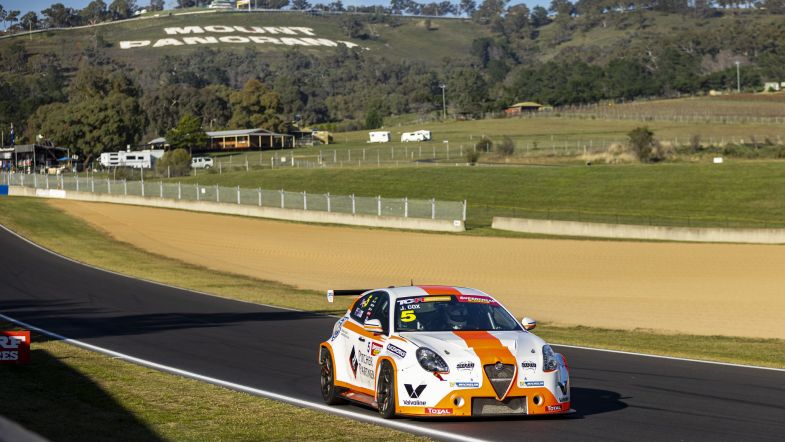 Mount Panorama has now seen the TCR Australia cars turn laps in anger around the iconic circuit with two practice sessions being run today ahead of the three races across the weekend.

The Alfa Romeo Giulietta TCR entries of Jordan Cox and Lee Holdsworth shared the honours of being fastest on track at the end of practice one and two respectively, showing their pace up and down the long straights to open and close the lap.

Though the Ashley Seward Motorsport car of Holdsworth was the first to crack the sub 2:20 marker in opening practice, Garry Rogers Motorsport’s Cox was able to lower the bar to a 2:17.7926 at the end of the session, putting in his lap after the chequered flag had come out.

Holdsworth’s Bathurst experience from his days as a full-time Supercars driver came to the fore in the second session, a 2:15.8092 putting him on top again after the chequered flag had come out, pipping his upcoming Bathurst 1000 co-driver Chaz Mostert’s time to get first position.

All three Honda Civic Type R drivers got in to the top ten in the first session with John Martin, Tony D’Alberto and Zac Soutar taking fourth, fifth and seventh respectively, split by the Hyundai i30 N of Bathurst local Brad Sheils.

Mostert could only manage eighth in the first session of the day ahead of HMO Customer Racing’s Josh Buchan and Bathurst 1000 winner Jason Bargwanna, entering the round as a  defending TCR Australia race winner after taking his first win in the series at Phillip Island.

Practice two saw Dylan O’Keeffe dropped to third after the late flyers by Holdsworth and Mostert, the GRM Renault driver beating team-mates Aaron Cameron and Cox to the position. Tander ended up in sixth ahead of ASM young gun Jay Hanson who was followed by the Honda’s of Martin, D’Alberto and Soutar, rounding out the top ten.

Qualifying tomorrow begins at 0740 local time, running for 25 minutes before the first race at 1040. As TCR Australia is on the undercard to the Bathurst 6 Hour this weekend, the second race will be run on Saturday at 1225 before the final outing on Sunday morning at 1012.