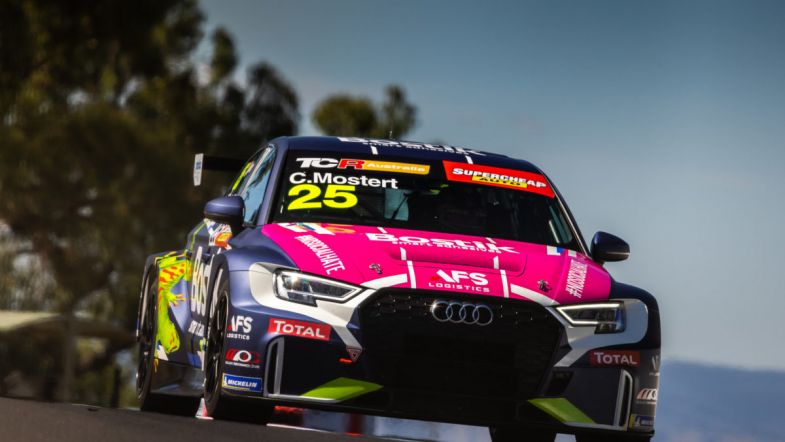 Melbourne Performance Centre recruit Chaz Mostert has shown the true pace of the Audi RS 3 LMS by taking his second straight pole in the category ahead of this morning’s first of three races at the Mount Panorama Circuit.

The full-time Supercars driver and former Bathurst 1000 winner has proved in previous rounds of TCR Australia that he has the speed to challenge at the front but that pace was unleashed in a shortened qualifying session this morning, his 2:16.0769 good enough for the top spot before a late red flag ended the session prematurely.

Opening practice pacesetter Jordan Cox went off in the final sector aboard his Garry Rogers Motorsport prepared Alfa Romeo Giulietta TCR, bringing out the red flag with around 10 minutes to go before race control ultimately chose not to restart the session.

Second placed Aaron Cameron’s lap was a full second down on Mostert’s, the GRM Peugeot 308 TCR driver being able to prevent a front row lockout for MPC as defending Bathurst 1000 winner Garth Tander ended up third, making his first start in the series this season.

Young gun Jay Hanson is the best hope for Ashley Seward Motorsport after his team-mate Cox’s issues, starting fourth while the time Cox set will be deleted due to bringing out the red flag. Bathurst local Brad Sheils lines up fifth in his Hyundai i30 N TCR alongside the Alfa Romeo of Lee Holdsworth who was the fastest driver in Friday practice.

Following on from the trend of practice, the Wall Racing Honda Civic Type R TCR entries of Tony D’Alberto and John Martin were inseparable, this time it was D’Alberto who got the edge and will start seventh. MPC driver Luke King and GRM’s Dylan O’Keeffe complete the top ten on the grid.