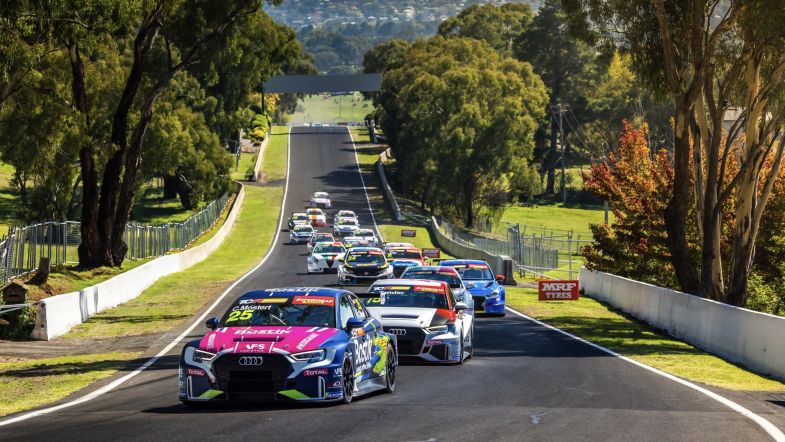 TCR Australia championship leader Chaz Mostert has taking the Melbourne Performance Centre Audi RS 3 LMS to the top step of the podium for the fourth time in five races after a strong fightback in the second Saturday race in Bathurst.

Heading in to the race after taking the lead late in the opening outing from Aaron Cameron, Mostert again had to fight the Garry Rogers Motorsport Peugeot 308 driver to take his second win of the round, further extending his championship lead despite running with 60kg of ballast.

Just as it was in race one, Cameron got the jump on the outside of the front row to lead the pack into Turn 1, checking out to hold a lead of over two seconds at the end of the first tour.

Jordan Cox pulled off the move of the opening lap when he went three-wide in his Alfa Romeo Giulietta TCR down Conrod Straight on the outside of Brad Shiels’ Hyundai i30 N TCR and fellow Alfa driver Lee Holdsworth, picking up two spots to jump up to sixth at the conclusion of lap one.

Cameron maintained a comfortable gap to Mostert as behind him the Ashley Seward Motorsport Alfa Romeo of Jay Hanson was keeping the MPC Audi driven by four-time Bathurst 1000 winner Garth Tander at bay as Cox moved himself to fifth, closing in on the podium contenders.

Mostert was able to repeat his race one pace and soon stripped away Cameron’s advantage out front by setting the fastest lap of the race in pursuit of the GRM Peugeot, eventually getting through on Conrod Straight upon entry to The Chase to again take the lead.

The battle for third heated up when contact was made between Hanson and Cox as Tander moved through to the podium spot, Hanson coming off worst and dropping back to 20th place. John Martin was a distant fifth but was keeping the Wall Racing Honda Civic Type R clean as behind him the Bathurst local Brad Shiels had to hold off former Supercars drivers Lee Holdsworth and James Moffat.

Shiels’ ran wide at the exit to Forrest Elbow which let Holdsworth get under his wing on Conrod Straight, making his move into The Chase for sixth as Moffat soon followed suit, demoting the Hyundai to eighth.

Mostert was unmatched in the run to the finish, again leading Cameron home to the win as Tander just held on against Cox to take another podium finish. Martin secured fifth while Holdsworth, Moffat, Shiels, Michael Caruso and Jason Bargwanna rounded out the top ten.

Heading into race three at 1012 local time tomorrow, Mostert now sits on 294 points in the championship standings, 49 ahead of second placed Holdsworth who will join the leader at Walkinshaw Andretti United for this year’s Supercars endurance races.