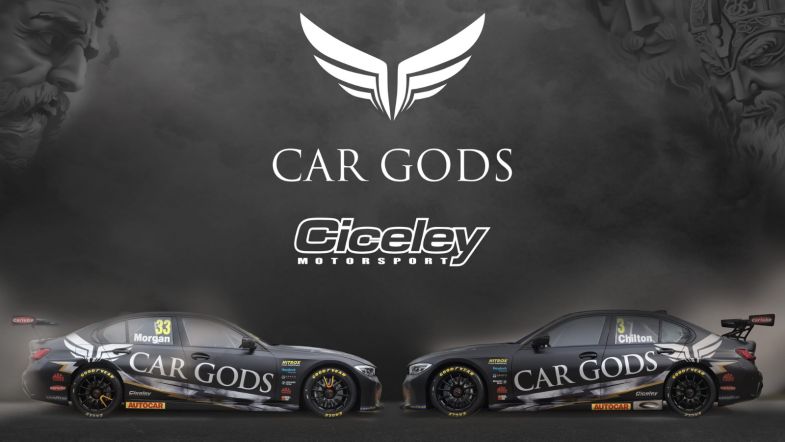 Ciceley Motorsport has revealed the livery that will adorn its two new BMW 330i M Sports for the 2021 British Touring Car Championship season.

The team will run a pair of cars for Adam Morgan and Tom Chilton, with the BMWs being entered under the Car Gods with Ciceley Motorsport banner.

Car Gods is part of the Tetrosyl family alongside the likes of Carlube, which was title sponsor of the Ciceley programme last year.

“This has got to be our biggest year to date,” team commercial director Norman Burgess said. “With new title sponsorship, new cars and two top drivers, together with our existing engineers, team members and values, we’re in the best possible position to do well in 2021 and beyond.

“It gives us great confidence moving towards a new era with the BTCC’s move to hybrid in 2022.”

Both drivers have been busy testing the cars in recent weeks, with Morgan pleased with the performance of the BMW from the outset.

“Testing has been spot on,” added Morgan. “Both Tom and I have really got to grips with the BMW and its rear-wheel-drive characteristics straight away. We have been on the pace at every test so far and still have another four tests to go before the season starts. We are all very confident that the cars will be ultra-competitive straight out of the box.

“The cars look amazing, I was blown away when I first saw them in the flesh. I, like Norman, am just so grateful that Car Gods have granted us this opportunity and continue to provide much needed support to the Ciceley Motorsport team.”