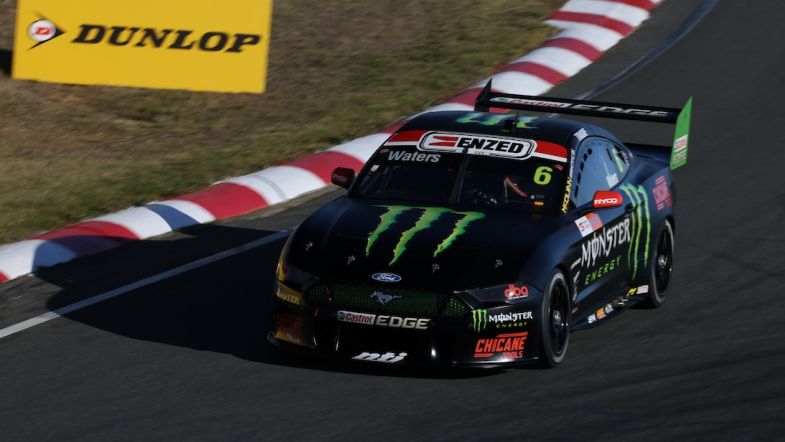 Cam Waters was the man to beat in free practice as the Supercars Championship returned to action in Tasmania for the first time since 2019.

The Tickford Racing man led the way in both sessions around the compact Symmons Plains circuit, leaving it late to secure his place at the head of the times in the final seconds of the opening 30 minutes of action.

A lap of 50.8468s in the closing moments proved to be enough to put his Ford Mustang on top of the times ahead of DJR’s Will Davison in a session that saw the whole field covered by just eight tenths of a second.

Chaz Mostert was the best placed of the Holden drivers in third spot ahead of an impressive Jack Le Broq, with points leader Shane van Gisbergen slotting into fifth having set the pace in the early part of the session in his Triple Eight-run car.

David Reynolds then rounded out the top six for Erebus Motorsport in a session that had to be halted for ten minutes after an issue for Tim Slade saw him lose a wheel on his Blanchard Racing Team Mustang.

Slade would manage to return to action after quick repair work by the team, and ended up posting the seventh best time.

Second practice would once again prove to be a closely-fought affair, with Waters setting the early pace before Mostert jumped into top spot on a 50.8798, with Anton de Pasquale and Jamie Whincup hot on his tail.

Less than a tenth of a second covered the top six drivers heading into the closing minutes as the field returned to the track for the final laps of the session, with Le Broq vaulting to the top of the times only to be usurped immediately by both de Pasquale and van Gisbergen as the times dipped below those seen in the earlier half hour session.

As the clock ticked down to zero and de Pasquale returned to the pits, Waters was on a quick lap and he duly completed a practice sweep with a time of 50.7244 stealing P1 on the timesheets.

De Pasquale and Van Gisbergen followed behind with Le Brocq also within a tenth of a second of top spot in fourth place. Chaz Mostert and Mark Winterbottom then rounded out the top six in a session where the top 19 cars lapped within half a second of each other.

A number of other drivers suffered minor dramas, with Bryce Fullwood brushing the wall at turn four, Nick Percat and Gary Jacobson running off at turn two and Todd Hazelwood almost sliding off at the hairpin.