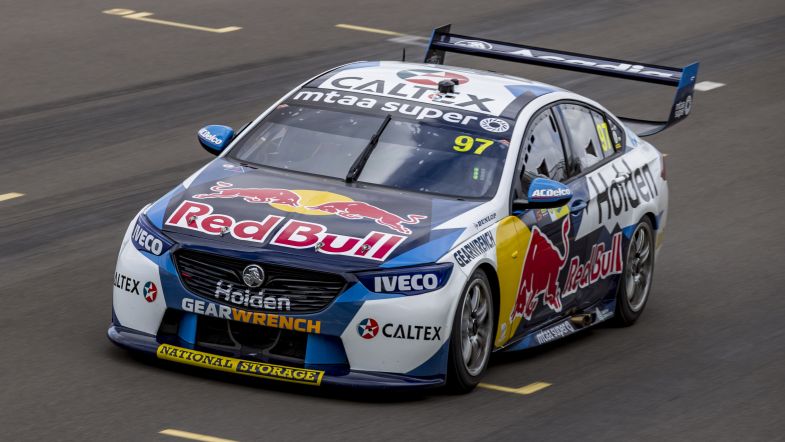 Shane van Gisbergen produced an astonishing performance in qualifying at Symmons Plains as he stormed to a fourth pole of the Supercars season in record-breaking fashion.

The session would see the first appearance of a new qualifying format, with the field split in two for the opening phase of running.

Two groups of twelve cars would hit the track for a five minute blast to determine who would make it through to Q2, with the leading eight drivers from each group continuing on in the session.

In Group A, WIll Davison was the first man to set a really quick lap on a 50.8939 before points leader van Gisbergen moved into P1 with lap just shy of the fastest time seen in the two free practice session ahead of Cam Waters – the man who had topped practice.

Macauley Jones, Fabian Coulthard, Nick Percat and Andre Heimgartner were the four drivers eliminated; the latter struggling for ultimate pace in his Mustang having also been down the order in practice.

Group B would be the slower of the two sessions as Anton de Pasquale headed proceedings on a 50.9374, with Scott Pye and Jamie Whincup being the only other drivers to break the 51s mark.

This time around, Gary Jacobson, Tim Slade, Bryce Fullwood and Todd Hazelwood were bumped from the session, with the latter left to rue a moment that saw him take a trip across the grass.

The remaining 16 drivers headed through to Q2 with ten minutes of track action meaning drivers were able to carry out more than just one run on track.

Van Gisbergen led the way after the first run having lapped slightly faster than in Q1 but there was a surprise name behind as Jack Smith put his Brad Jones Racing car into P2 with a lap just 0.0741s behind, with Mark Winterbottom and Waters also within a tenth of the championship leaders benchmark.

After all of the drivers had returned to the track for their second runs, van Gisbergen improved his best time to a 50.5103, going close to the qualifying lap record held by team-mate Jamie Whincup.

That put the Triple Eight driver nearly a quarter of a second clear of Scott Pye, with Waters taking third and Smith making it through in fourth.

David Reynolds and James Courtney were amongst the big names to drop out, with Jack Le Brocq down in 16th as he was unable to replicate the strong pace he had shown in the early practice sessions.

Van Gisbergen wasted little time in laying down a marker in the final phase of the session, immediately setting two laps in the 50.7s bracket to sit ahead of Mostert – who underwent a quick brake pad and rotor change in the short break between Q2 and Q3.

Waters held third spot from Pye, with Will Brown and Whincup the only other two drivers to head out early having elected to have two runs in the ten minute window.

Brown was the only driver who elected not to then hit the track with four minutes remaining to determine pole but van Gisbergen would prove to be untouchable at the front as he stormed to a new qualifying record on a 50.4923.

That meant the points leader – unbeaten so far this season – ended up with a mammoth gap of three tenths of a second over Waters as he improved to get ahead of Mostert, with Whincup slotting into fourth spot in the second of the Triple Eight cars.

Will Davison was fifth quickest ahead of Pye and de Pasquale, with Winterbottom, Brown and Smith rounding out the top ten.