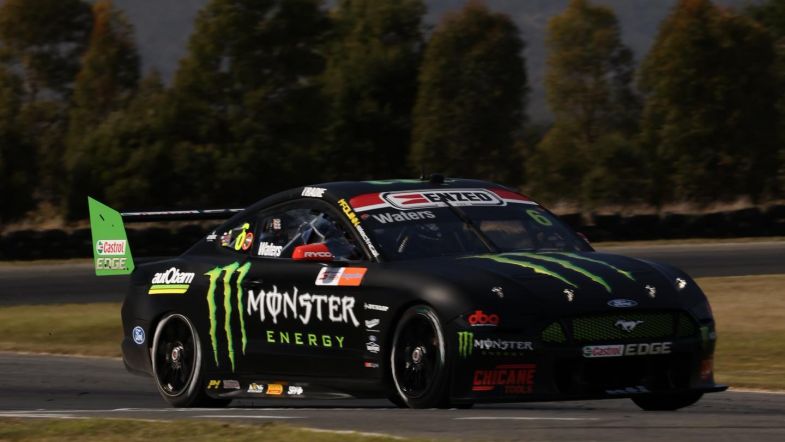 Both sessions would once see the field split in two to try and reduce any potential track issues around the short Symmons Plains circuit, but without the knockout element seen ahead of race one on Saturday.

Qualifying for round seven saw Waters set the early pace in Group A during the eight minutes of running, but it would only be after a quick trip to the pits that the fastest laps would then be set.

Will Brown was the first driver to break the 51s marker as he laid down a marker of 50.8994s to move onto provisional pole but Waters then responded by going a tenth of a second quicker on a 50.7634 – three tenths down on the record-breaking lap posted on Saturday by points leader Shane van Gisbergen.

Brown would end up second fastest ahead of Will Davison, with van Gisbergen down in fourth spot in his Triple Eight Racing Holden – admitting afterwards that a set-up change hadn’t worked as planned.

The remaining twelve cars then headed out for their eight minutes of on-track running before the grid for the second race of the weekend could be set, including Jamie Whincup and Anton de Pasquale – who joined van Gisbergen on the podium on Saturday.

After an exploratory opening run, de Pasquale was the first driver to get amongst the front-runners from Group A as he slotted into second on the time sheets but was then beaten by Whincup, who managed to edge ahead of the DJR driver to put his car onto the front-row alongside Waters.

The remainder of the group would be noticeably slower than the one that had hit the track shortly before, leaving Brown in a personal best fourth on the grid ahead of Davison and van Gisbergen.

Scott Pye was the only other racer that was able to break into the top ten from Group B as he set the ninth best time, and was the final driver to lap within two-tenths of a second of pole.

The field was split in the same way for qualifying for round eight, but with just five minutes on track in which to set a timed lap.

Brown was once again the first man to break the 51s mark in Group A but his provisional pole time wouldn’t last for ling as times tumbled – with Chaz Mostert briefly setting the second quickest time of the weekend to move into P1 only to by then be headed by Waters, who was running behind on track.

It left Waters facing up to a potential double pole having managed to go just 0.0186s quicker, with Zane Goddard producing a storming run to go third ahead of Davison, van Gisbergen and Winterbottom.

The Group B drivers were headed by de Pasquale after the first quick laps as he slotted into third spot, with Whincup going sixth before returning to the pits.

De Pasquale was unable to improve on his final flyer which meant Waters wrapped up a double pole with Mostert alongside on the front row, with de Pasquale sharing row two with Goddard. Davison and Whincup will then share row three with van Gisbergen joined on row four by David Reynolds; who will hope for no repeat of the issues that ruined his Saturday race.