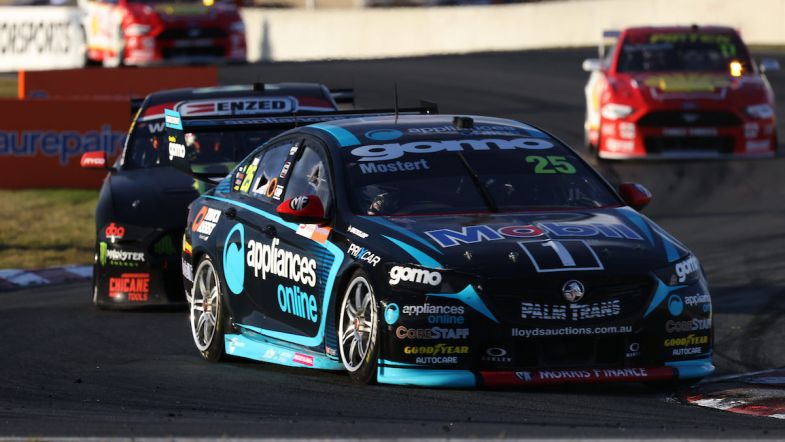 Chaz Mostert has finally broken through for his first win with Walkinshaw Andretti United after failing to record a victory throughout 2020, finally converting for the first time in the 2021 Supercars season.

Having started second on the grid next to former Tickford Racing team-mate Cam Waters, Mostert quickly took the lead and never looked back, securing the first win for the squad since Scott Pye won at the Australian Grand Prix support race back in 2018.

The win also breaks a streak of Triple Eight victories with Shane van Gisbergen winning the first six races of the year, followed by Jamie Whincup extending it to seven with a first place finish earlier today.

Starting on the outside of the front row, Mostert got the holeshot off the line to lead into the opening complex of corners, soon opening up a comfortable air gap over Waters while the pair easily checked out from the Dick Johnson Racing cars of Anton de Pasquale and Will Davison behind.

Sandwiched between the DJR cars and the Triple Eight entries of Whincup and van Gisbergen was Zane Goddard, the Matt Stone Racing pilot having qualified fourth for the first time and holding his own amongst some of the heavyweights of the sport.

A fiesta battle between van Gisbergen and Whincup for sixth place gave Goddard a bit more breathing room, the Triple Eight pair making contact with each other which was all resolved when van Gisbergen pitted on lap nine.

A slow stop from his crew meant van Gisbergen was overcut by Whincup when his team-mate came in to take on his tyres the next lap around, the pair both managing to jump Goddard after the stops while the order out front remained the same.

Despite being held up by the Kelly Grove Racing car of Andre Heimgartner on his in-lap, Mostert emerged after his stop with a bigger gap to Waters than he’d enjoyed beforehand, setting up the victory with an easily manageable gap behind him.

Mostert was able to stretch the lead out to over ten seconds in the closing laps as Waters had to keep the DJR cars at bay, de Pasquale lining up to take a shot with Davison behind starting to come under pressure from van Gisbergen who finally got past his team-mate for fifth.

With poor tyre quality Waters couldn’t fight off de Pasquale, the #11 car getting past with three laps to go as Davison lined up a pass on the next lap, getting both DJR cars on to the podium as Waters was left vulnerable to the Triple Eight boys.

Waters was able to hold on to fourth with Whincup and van Gisbergen trading places in the final corners, all finishing well behind Mostert and the DJR cars of de Pasquale and Davison.

Goddard was able to finish a career best seventh, holding off the KGR car of David Reynolds, Tickford’s James Courtney and the highest placed Brad Jones Racing of Nick Percat to round out the top ten.