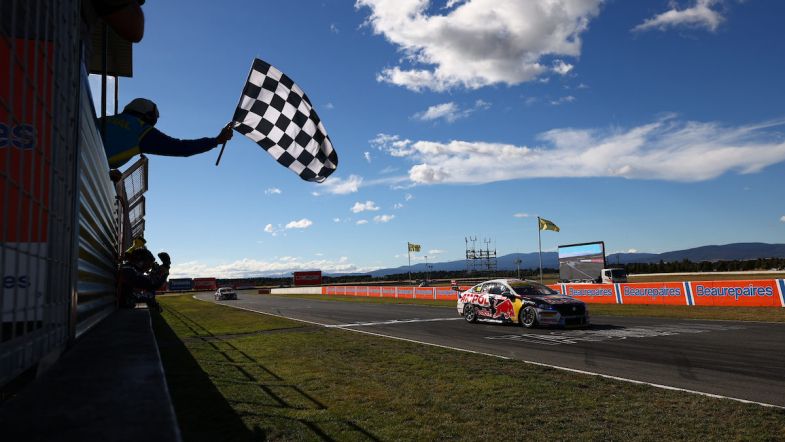 Jamie Whincup has taken his first win of 2021 and 123rd in total with a strong display in the first of two Supercars Championship races today at Symmons Plains, ending the winning streak of Triple Eight team-mate Shane Van Gisbergen in the process.

Coming in to the race qualifying second on the grid, Whincup was able to harass pole-sitter Cam Waters throughout the race, getting a leg up on the Tickford Racing driver late in the 44 lap outing to take the race lead.

Leading home a one-two finish for Triple Eight, Whincup was able to extend his team’s dominance at the Tasmanian venue to 22 victories from the last 32 races, also making it eight wins in a row for the team which started at last year’s Bathurst 1000.

Waters was able to convert his pole position to the race lead by beating  Whincup to the opening corners, heading up Triple Eight entry and the pack on the run to the Turn 4 hairpin.

After a relatively calm start to yesterday’s race, chaos ensued on the opening lap today with Anton de Pasquale being turned around by Jack Le Brocq, the Dick Johnson Racing driver dropping to the back of the pack while the Tickford Racing car ended up being spun by the Kelly Grove Racing entry of Andre Heimgartner, putting him back with de Pasquale.

James Courtney was lucky to get away with a big moment into Turn 1 when he lost the rear of the Tickford car thanks to a touch from Macauley Jones, going sideways and pushing Jack Smith’s Brad Jones Racing car off the road, leading them both to lose a handful of spots.

With the race settled down, Waters was still in the lead and keeping Whincup behind him as championship leader Van Gisbergen kept gaining spots, getting past Erebus Motorsport’s Will Brown for third.

Whincup kept chipping away at Waters’ race lead, getting to within striking distance of the Tickford car before the team decided to pull Waters in for his pit stop, allowing the two Triple Eight cars to take control at the head of the field.

Brown had followed Waters into the pits but found himself being overcoat by the DJR car of Will Davison who stopped on the next lap, emerging in front of the Erebus machine while up front Van Gisbergen took time off his team-mate in the hunt for the lead.

van Gisbergen assumed the race lead on lap 20 as his team-mate was called in to the pits, emerging back on the circuit only just behind Waters as the two arrived at the exit of Turn 2 side-by-side.

The battle between Whincup and Waters was finally resolved on lap 26 when Whincup finally got past for the spot, not without contact as the pair rubbed panels into Turn 6.

A late stop for van Gisbergen came on lap 27, the race leader ending up behind Davison and Waters who had fallen back from Whincup to the tune of two seconds in as many laps, now having to fight to stay on the podium after leading the race earlier.

Davison lost effective third place to van Gisbergen at Turn 4 as the Triple Eight car made its way down the inside of the DJR #17 despite being squeezed to a narrow line, setting his sights on Waters who he made the move on the next time around which allowed Davison to sneak past for the final podium place.

Though he had better tyre life, van Gisbergen couldn’t do anything about his team-mate’s lead, Whincup putting an end to the dream start to the season for the Kiwi but further extending their stronghold on the championship.

Some five seconds back from the pair was Davison, taking another podium for DJR after team-mate de Pasquale stood on the third step yesterday, beating home pole-sitter Waters to the spot.

In fifth place, Brown took his best main game result so far for Erebus, beating home experienced racers Chaz Mostert and Mark Winterbottom who enjoyed a scrap to the flag in their Walkinshaw Andretti United and Team 18 entries.

The two Kelly Grove Racing cars recovered after a horror Saturday to sandwich Scott Pye’s Team 18 Commodore, the #20 driver ending up only two spots down on his team-mate.