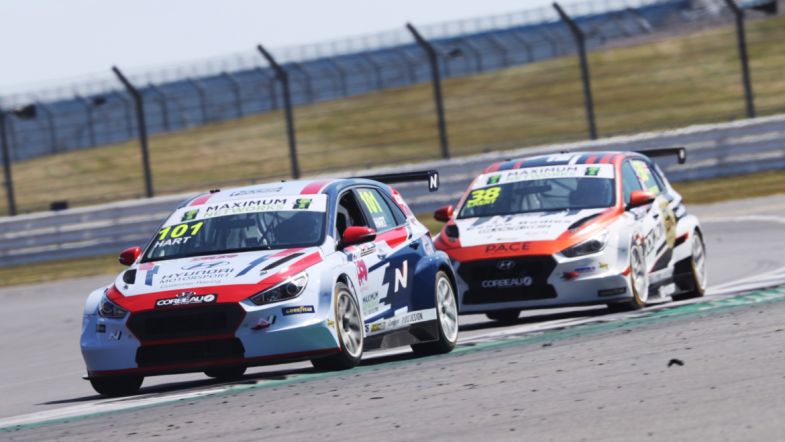 Having qualified on pole by less than a tenth of a second, Hart made the ideal start to the opening race in his new Hyundai i30 N TCR, with champion Lewis Kent jumping brother Bradley off the line to run second going into turn one.

The younger Kent would then be forced off track and dropped out of the race, meaning he joined Andy Wilmot on the sidelines after he suffered technical woes with the DW Racing Vauxhall Astra previously raced by Darelle Wilson.

After a quick safety car period to allow the stricken VW Cup car of Olly Turner to be removed from the circuit after failing to get away from the line, Hart held onto the lead from Kent, with Darron Lewis running third in the Team HARD Mercedes A Class and Dan Kirby up into fourth in the first of the Power Maxed Racing Cupras.

Kirby wasted little time in making a move on Lewis for third at Village, whilst behind, teenager Hugo Cook was a man on the move as he battled ahead of Jac Constable at Stowe to claim sixth having dropped spots on the opening lap.

Hart and Kent started to edge away from Kirby behind, with Lewis being forced to keep an eye on the mirrors as he came under pressure from Butler behind. The Cupra driver has a look at Village on lap nine but then ran wide on the exit of the kink, which enabled Cook in the lone Audi to get up into fifth.

By the end of lap eleven, Kent had closed onto the rear of Hart with the pair having moved nearly ten seconds clear of Kirby – with the fight for the lead closing in on the rear of the VW Cup field.

Coming through traffic, Hart managed to extend his advantage out to nearly a second, whilst behind, a moment for Kirby saw both Lewis and Cook get ahead as the Cupra slipped back to fifth.

Heading into the final five minutes, Kent had started to close back in onto the rear of Hart in the fight for the lead, but Hart then responded – setting the fastest lap just three laps from the end as he suddenly opened the gap back up to secure victory by more than two xeconds.

Lewis held on to take third, helped by Cook suddenly slowing coming through the final corners as he ran short of fuel. That saw Kirby get back into fourth spot, with Cook crawling over the line in fifth and Butler rounding out the top six.

Constable came out on top of a long battle with the second Mercedes of Toby Bearne to secure seventh, with series debutants Danny Krywyj and Bruce Winfield rounding out the top ten – the latter a lap down after pitting for a puncture.

Will Powell’s Hyundai failed to finish after pitting at the end of lap one, and would then be missing from the grid for race two, where Butler started on the reverse grid pole.

When the lights went out it was Kirby that blasted into the lead, with Lewis Kent enjoying a storming first lap to charge up to second, but with Hart following behind. Lewis found himself running in fourth in the Mercedes ahead of Cook’s Audi, with Butler slipping back to sixth spot.

Kirby managed to hold the lead until the fourth lap, when Kent managed to sneak ahead through Village, with Hart making the most of the fight between the pair to close in and make it a three way battle for the lead.

Kirby tried to come back at Kent into Vale but having been unable to find a way through, he then dropped down to third when Hart dived down the inside into Village at the start of lap five.

Having spent the opening race chasing down Hart, Kent made the most of being in clear air this time around to eek out an advantage of more than two seconds at the front, and the pair would hold station until the end of the race, despite Hart managing to close in slightly in the closing stages.

Instead, the main focus of the race was the fight for third, with Kirby having the pace to keep Lewis in the Mercedes at bay during the early phase of the race.

Behind, Bradley Kent was the man on a move, working his way forwards from twelfth on the grid to climb into the top six by the half way stage, before he cleared Cook for fifth and then passed Lewis for fourth.

A two second gap to Kirby was soon eradicated as the Essex & Kent Motorsport driver closed in on the Cupra, with the battle between the pair bringing Lewis back into the mix.

The trio came across the two squabbling VW cup leaders, with Kirby managing to get through but Kent losing out as he took the wrong line and Lewis reclaimed fourth spot.

Although he dropped more than two seconds back, Kent quickly caught back onto the rear of the Mercedes ahead and got back into fourth spot as the clock ticked down towards zero, but Kirby had built enough of an advantage to ensure he couldn’t be caught in the fight for the final spot on the podium.

Kent therefore had to settle for fourth place from Lewis, with Cook taking sixth spot despite the best efforts of Winfield. Bearne, Wilmot and Krywyj rounded out the top ten after a late problem for Butler, whilst Constable retired with a puncture.