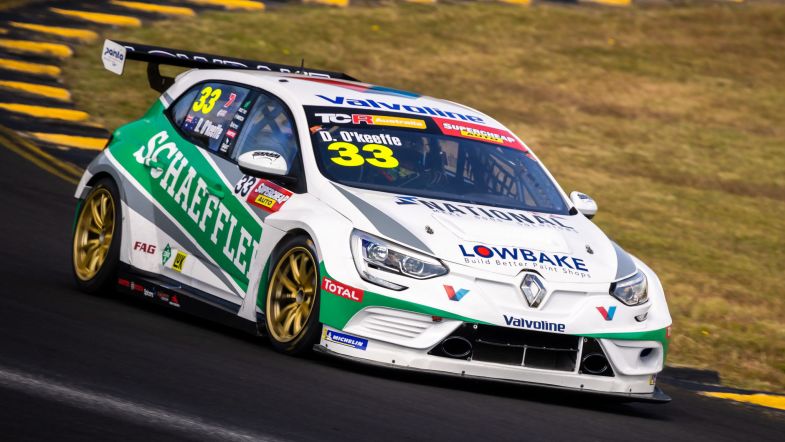 Garry Rogers Motorsport has finally put a Renault up the sharp end of the grid in the 2021 TCR Australia series as Dylan O’Keeffe dominated the qualifying session, lowering the lap record at Sydney Motorsport Park to take his first pole of the year.

Having only secured one top ten start in 2021, O’Keeffe showed speed from the moment the final part of qualifying got underway, setting a target for everyone else to chase before further lowering it to easily put himself clear of the challengers.

The first ten-minutes of qualifying saw only the top ten drivers progress to the next session, the fast laps coming towards the end of the outing with the Michelin tyres taking a few laps to get up to operating temperature.

Championship leader Chaz Mostert was lucky to squeeze into the ten in his Melbourne Performance Centre Audi RS3 LMS, just scraping through by less than a tenth as his team-mate Luke Kind could only manage 15th place.

The top ten runners from the first part of qualifying took to the circuit to finalise their grid spots as Dylan O’Keeffe fired an early shot, going to the top with only five minutes remaining in his Garry Rogers Motorsport Renault Megane RS TCR and then further lowering the bar by half a second.

With O’Keeffe’s time eight-tenths quicker than the qualifying record, the rest of the field could only chase the GRM driver’s time as the clock wound down, Buchan getting within two-tenths but unable to challenge, giving O’Keeffe pole for the first race.

James Moffat was able to convert his practice speed to third on the grid aboard his GRM Renault, pipping the Wall Racing Honda Civic Type R of John Martin by a fraction of a second. Morcom and Mostert behind them filled the third row while Tony D’Alberto, Michael Caruso, Aaron Cameron and Jason Bargwanna completed the top ten.

Race one for the weekend starts at 1325 local time and is scheduled to run for 15 laps.