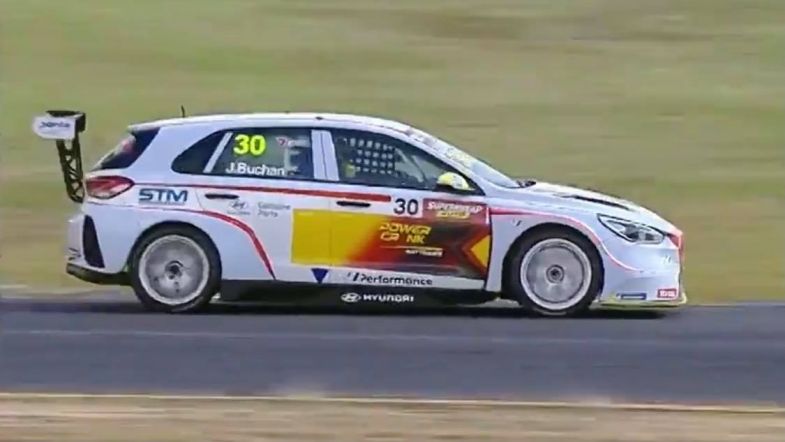 TCR Australia rookie Josh Buchan has taken his first race win in the category after controlling the first race at Sydney Motorsport Park, taking the HMO Customer Racing outfit back to the top step of the podium.

Buchan was slated to start second but was the benefactor of an issue for the pole-sitting car of Dylan O’Keeffe, having to still put up a fight against those behind him on the grid on the opening lap and later taking the lead back with one of the passes of the year, around the outside into the Turn 1 sweeper.

A pre-race issue for  O’Keeffe meant the Garry Rogers Motorsport driver had to start from the pit lane, a penalty for the team fixing a problem on his Renault Megane RS TCR when the field was gridded up before the formation lap.

Buchan inherited the effective pole, starting alone on the front row but getting beaten to Turn 1 by the fast-starting John Martin, squeezing the Wall Racing Honda Civic Type R up the inside of Buchan’s Hyundai i30 N to take first.

Buchan fought back at Turn 6, trying to make a dive-bomb work but he ran wide, allowing Martin back through at Turn 7 as both cars were shadowed by the GRM Renault of James Moffat behind, keeping the lead pair honest.

Martin ended up losing two spots in as many corners after losing speed through the last corner leading into the third lap, being the victim of a pass around the outside from Buchan at Turn 1 as Moffat then got down the inside at Turn 2, dropping Martin within striking distance for championship leader Chaz Mostert to try and make a move in the Melbourne Performance Centre Audi RS3.

Buchan and Moffat were able to check out from Martin heading into the final five laps, enjoying a gap of over five seconds to the Wall Racing car as the fight started to wind down, Buchan opening up a gap of two seconds to Moffat with relative ease.

Mostert was finally able to get past Martin for third, getting himself on the podium again as Martin kept dropping down the order, suffering a problem with his Honda Civic which dropped him outside the top ten.

Out in the lead, Buchan came through for his first win ahead of Moffat and Mostert. Tony D’Alberto ended up as the quickest Honda in fourth as Nathan Morcom put his Hyundai in fifth, coming home strong ahead of the Alfa Romeo’s of Michael Caruso, Jordan Cox and Lee Holdsworth.

Aaron Cameron benefitted from Martin’s woes at the end of the race, picking up ninth place as O’Keeffe fought back from the pit lane to take tenth in the final laps. Despite leading early in the race, Martin dropped to 13th after an issue with his car, being beaten on the run to the line by Brad Sheils.

Race two tomorrow gets the green flag at 1010 local time as the final outing of the round starts at 1325.