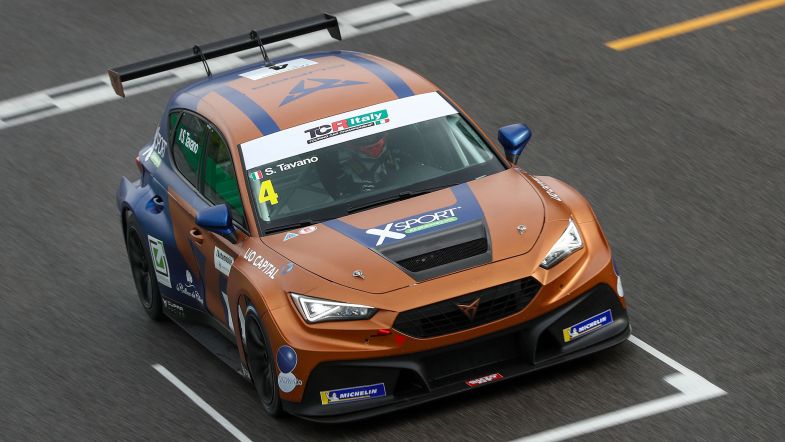 Scuderia del Girasole driver Salvatore Tavano stormed to victory in a wet first race of the TCR Italy season opener at Monza behind the wheel of his Cupra Leon Competición,.

At the start Eric Brigliadori was slow off the line, with Tavano going side-by-side with the polesitter. Matteo Poloni managed to not lose traction but it would be Igor Stefanovski, driving a Hyundai from AKK Stefanovski, who took the lead at the first chicane, ahead of Poloni and Jonathan Giacon in a Honda Civic Type-R TCR.

Tavano attacked Giacon on the main straight to take second place and Poloni went straight on at the first chicane, with Aggressive Team Italia’s Kevin Ceccon, at the wheel of a Hyundai i30 N TCR, taking advantage of the various incidents to climb to third place.

The fight for the lead allowed Ceccon to close the gap to the leaders, with series newcomer Antti Buri, with a Hyundai i30 N TCR from Target Competition, climbing up to fourth place.

Brigliadori was able to recover from his first lap troubles, challenging Poloni for fifth place, but both made mistakes at the first two chicanes, with Brigliadori overtaking for fifth at the first Lesmo corner on lap five.

Tavano opened a two-second gap at the front, with the positions stable, but Buri started his attack on Ceccon for third place on lap six, as Brigliadori was also closing the gap to the Finn.

The positions remained stable and, with five minutes left on the clock, Stefanovski was closely followed by Ceccon, Bury and Brigliadori.

The three came side-by-side at the first chicane on lap eleven. The trio closed on Stefanovski, with Buri overtaking Ceccon for third at Ascari. Stefanovski fell prey to the two Hyundais before arriving at Parabolica, and then went straight on at turn 1 on lap 12. The Macedonian slowed down to give Buri the position back, also losing to Ceccon and Brigliadori.

Brigliadori overtook Ceccon for third place on lap 13, with the Aggressive Team Italia driver battling with Stefanovski to defend fourth place. The polesitter attacked Buri on the main straight on the last lap, overtaking for second place. The Finn lost ground to Ceccon and Stefanovski on the last lap

Tavano claimed the victory at the chequered flag, with Brigliadori and Ceccon completing the podium.

The TCR Italy field returns to the track for Race 2 on Sunday morning at 10:10 CEST.