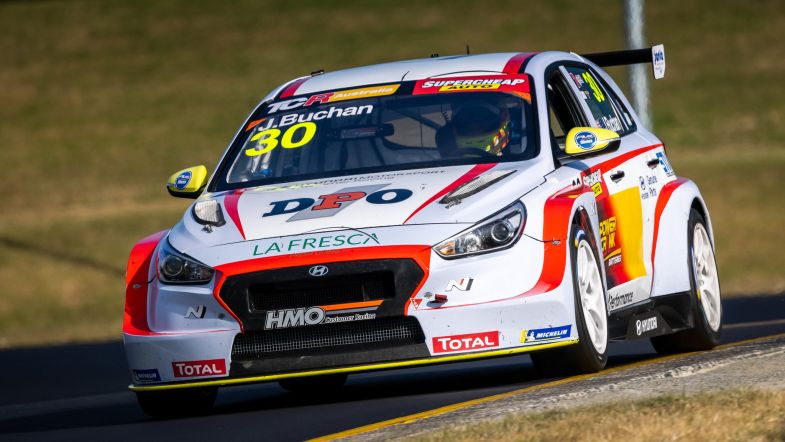 HMO Customer Racing has taken two wins on the trot in the TCR Australia series after their rookie Josh Buchan took his second race victory in a row, converting pole to the race victory at Sydney Motorsport Park.

A day after taking his first win in the series, the Hyundai i30 N TCR driver was able to set the pace at the front of the field all race long, going unchallenged throughout the 15 lap outing to take home a bag of points.

Buchan converted pole position to a holeshot heading into the first corner as James Moffat bogged down off the line, losing a handful of spots from the front row while Chaz Mostert squeezed his way through to second in the Melbourne Performance Centre Audi RS3, leading Tony D’Alberto’s Wall Racing Honda Civic Type R.

As he had done in Saturday’s race, Buchan extended a lead, leaving Mostert just over two seconds behind with only five laps run as the front end of the pack started to space out and stabilise thanks to the Michelin tyres coming up to operating temperature.

D’Alberto lost his podium position to Michael Caruso as the Garry Rogers Motorsport driver slotted his Alfa Romeo Giulietta past the Honda heading in to Turn 1, then dropping down another spot to Nathan Morcom in the second HMO Customer Racing entry.

Moffat’s fightback from as low as ninth was aided by D’Alberto continuing to drop through the pack, going down to the back end of the top ten as the Honda driver struggled to keep pace, still managing to come home in the top ten.

Buchan was unchallenged to the flag as Mostert took home more points for his championship lead while Caruso took the last step on the podium. Morcom held on to fourth with the GRM Renault’s of Moffat and O’Keeffe behind him, Luke King (Audi), Lee Holdsworth (Alfa Romeo), Ben Bargwanna (Peugeot) and D’Alberto completing the top ten.

The final race of the weekend starts at 1325 local time.