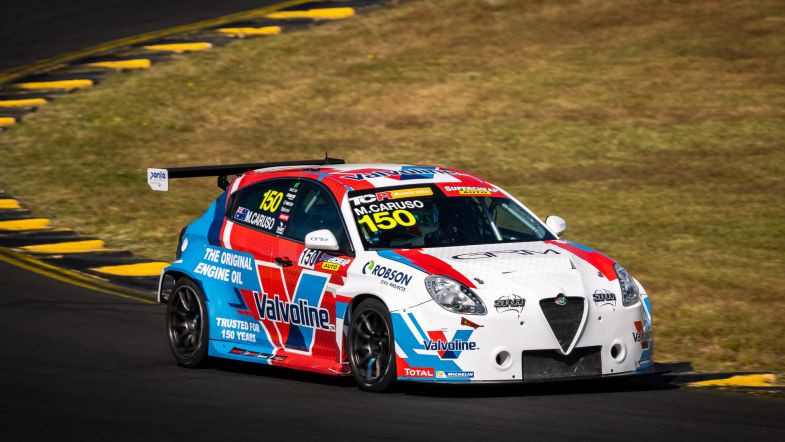 Garry Rogers Motorsport is celebrating a win after a tough final race at Sydney Motorsport Park as Michael Caruso broke through for his first victory in the TCR Australia series, getting the lead early on and staying there in a safety car interrupted race.

Though the win was sweet for Caruso there’s no doubt some of the prize money will go towards a repair bill for the GRM squad as two of their Peugeot 308 TCR entries suffered damage early on in the race, being the cause of two extended safety car periods which saw only two full racing laps take place.

Caruso shot to the race lead as the lights went out, squeezing down the inside of pole-sitter Josh Buchan’s Hyundai i30 N to take first place into Turn 1 as further back on the grid Jason Bargwanna’s day ended within metres, the Garry Rogers Motorsport Peugeot 308 making contact with the stalled Honda Civic Type R of Michael Clemente.

The contact on the grid forced Bargwanna to the side of the track, meaning the safety car made its first appearance of the weekend with Caruso heading the field, Buchan tucked behind with HMO Customer Racing team-mate Nathan Morcom in third.

Racing resumed at the start of lap five but soon halted again as Aaron Cameron pitched his GRM Peugeot into the inside wall at the exit of Turn 2, being spun after being in the middle of a three-car overlap between Luke King and Lee Holdsworth, the second-placed driver in the points coming off worse.

Holdsworth had issues with his Ashley Seward Motorsport prepared Alfa Romeo Giulietta under the safety car, dropping a bunch of spots and then following that up with coming to a stop just before the green flag was set to fly.

With only twolaps left, racing finally got back underway as Dylan O’Keeffe moved himself up to third past Morcom, the GRM Renault Megane RS getting back to the podium after starting the first race of the weekend from the pits despite qualifying on pole.

Caruso started the last lap in the lead as Buchan went through Turn 1 with opposite lock being applied, sliding the Hyundai up to the Alfa’s rear bumper as O’Keeffe started to put the blowtorch on the race of Buchan’s car but the positions remained unchanged on the run to the flag, Caruso taking his first win while Buchan took the round win.

O’Keeffe lost his podium finish and dropped out of the top ten after a safety car restart infringement, being the second time the GRM driver has bit hit with the rulebook over the weekend. The penalty promoted Morcom to third, meaning both HMO Customer Racing cars made it onto the podium in the last race.