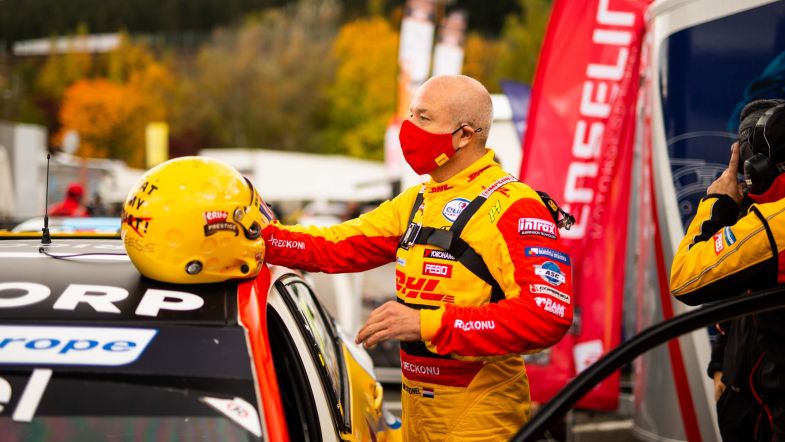 Coronel, who is a three-time race winner at the Slovakia Ring, headed fellow Dutchman Niels Langeveld by just over four-tenths of a second, with the Brutal Fish Racing Honda Civic Type-R TCR of Jack Jack Young third fastest.

As forecast, rain hit the circuit before the start of the second half an hour session, with a number of drivers – including the Comtoyou Racing Audi RS 3 LMS of Nicolas Baert – who was fourth fastest – and Jack Young’s Brutal Fish Racing Honda Civic Type-R – struggling for grip and taking to the gravel.

Sébastien Loeb Racing’s Langeveld was the early pacesetter in his Hyundai Elantra N TCR, some six-tenths of a second quicker than Coronel for most of the session, showing a marked improvement for the new-for-2021 car.

But Coronel revelled in the wet conditions and found more than a second to top the times with just under six minutes left to end up fastest.

Indeed, the session appeared to play into the hands of the long wheel-based cars, with Mat’o Homola in the Janík Motorsport Hyundai i30 N TCR in seventh.

Much like in the first session, Coronel’s Comtoyou Racing Audi RS 3 LMS team-mate Dušan Borković had another strong showing on his first TCR Europe weekend back, posting the fifth quickest time, 1.222s off the pace.

Klim Gavrilov and Viktor Davidovski rounded out the top ten.

First practice pacesetter Mikel Azcona failed to set a representative time in his Volcano Motorsport Cupra León Competición after spending the bulk of the session in and out of the pits.

Azcona’s team-mate Evgenii Leonov didn’t hit the track at all during the session.

Next up is qualifying, which is scheduled to take place on Saturday at 10:10 CEST.